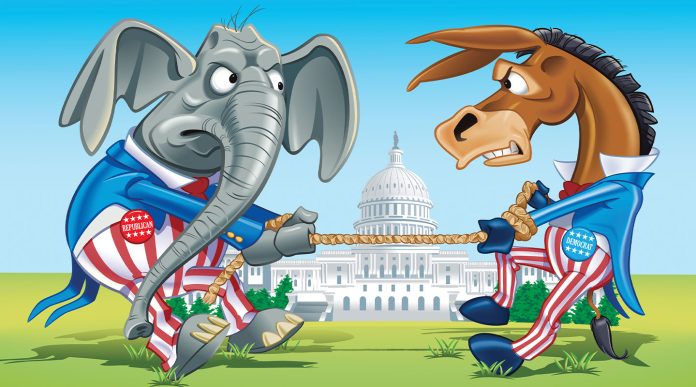 I’m over the “horse race” method of election analysis. Every vote counts in a winner-take-all system, of course, but the carnival atmosphere of election season with all its noise, color, and glitz can be a captivating diversion. Those of us committed to growing the movement for social and racial justice must maintain our attention on the bigger picture and essential issues both during and after each election.

Democracies based on capitalism have always been “flawed” and unstable. The right-wing alternative, authoritarian government, is still a terrifying and dangerous but all-too-real option. As a result, we must simultaneously organize and mobilize for something better while safeguarding the political rights we already have and making the most use of them.

The flaws in capitalist democracy have been exposed during the last eight years, and this midterm election has made the problems we face even more clear. Many commentators lament that “our democracy” is under danger. Yes, but it has never truly belonged to all of us, and fewer and fewer people are able to claim it as their own. Elites have had a stronghold on governance and the state since the beginning, primarily consisting of landowners and slaveowners who were white men, however today’s elites are more varied. The ability to vote and hold office has increased, but new barriers to fully exercising democracy in decision-making have also been put up.

This includes Supreme Court rulings like Citizens United that have permitted corporations and extremely wealthy people to exert despotic power in recent times, as well as the current wave of voter suppression laws like Florida’s SB90, Texas’s SB1, Georgia’s SB202, and so on. And when legitimate barriers to voting are overcome, more brutal tactics are used.

Black southerners are all too familiar with this from the time of Jim Crow, when Black voters were threatened by night riders and white vigilantes, or by landlords who threatened to evict Black sharecroppers if they ever attempted to register to vote. Fannie Lou Hamer, a legendary figure in the civil rights movement, was the target of several similar threats. Because she dared to use her right to vote, she was assaulted and suffered long-term impairments. More than anything else, the development of racial militias that threaten to watch the polls or, worse, protect the predetermined conclusion of right-wing victories is reminiscent of fascist dictatorships.

The possibility of a GOP numerical triumph in the House of Representatives is still present, but there was a shadow hanging over this year’s midterm elections. Lindsey Graham has already warned that there will be riots in the streets if dictatorial tyrant Trump is ever found guilty of and imprisoned for the numerous crimes he appears to have committed. That is just one of many signs that the right-wing movement currently in control, both elected and unelected, is willing to utilize illegal measures to maintain their hold on power. A loud and obvious wake-up call regarding this issue came on January 6.

The flaws in capitalist democracy have been exposed during the last eight years, and this midterm election has made the problems we face even more clear.

In the 2022 midterm elections, there were xenophobes with guns, climate deniers, anti-choice zealots, and foul-mouthed fearmongers on the ballot. This time around, racism and misogyny were more overtly on the ballot than ever before. Racist and sexist stereotypes and tropes were frequently used to frighten and intimidate disenfranchised white voters. Commercials on television showed images of bloody mayhem and eerie, out-of-control individuals pillaging and looting. The fig leaf was taken off in these instances, and young Black guys on the rampage were openly shown as “crime.”

These scenes were taken out of context, repeated, and portrayed in political advertisements as though they happened frequently. The message was: If you do not elect a GOP candidate, crime and violence will come to your suburban community. Contrasted with violent cities populated by violent Black and Brown criminals were “safe” white communities.

The flaws in capitalist democracy have been exposed during the last eight years, and this midterm election has made the problems we face even more clear.

Politicians that are Black and women were used to further these racist, sexist, and reactionary programs, unlike in previous elections where only white candidates supported anti-Black policies. These Black right-wing candidates include Jennifer-Ruth Green in Indiana, Richard Irvin, who participated in the Illinois GOP gubernatorial primary, and Herschel Walker in Georgia, who is running to replace Senator Raphael Warnock. Walker is the standard bearer for Black reactionary opportunism.

Therefore, despite John Fetterman’s narrow victory in Pennsylvania and Warnock’s potential victory in Georgia’s runoff, we still have a lot of work to do to stop perilous forces that transcend political politics and endanger our very lives. No of who wins the election, right-wing hate groups will continue to promote their goal. Therefore, this election season is not just about gaining more votes; it is also about winning the ideological conflict, which is much more challenging.

Elections still matter, even though we must look beyond the voting box to comprehend and act on this situation. Elections do matter, despite all of my concerns about the overemphasis on electoral politics. There haven’t been many revolutions in contemporary history that haven’t required polling the populace to find out who and what they want to lead. Additionally, there are qualitative differences between a defective and fractious capitalist democracy and authoritarian proto-fascist rule.

It counts if there are representatives like Cori Bush, Rashida Tlaib, or Ilhan Omar in Congress, or if a decent person holds local government as opposed to a proto-fascist.
I pose the following question to those on the left who reject the “sellout politics” of bourgeois democracy: Do you know of anyone who has endured a complete dictatorship? I do. People are frequently and in great numbers detained without cause, imprisoned, subjected to torture, expelled, and murdered. There are no demonstrations calling for the release of detained coworkers outside the police station. Under dictatorships, dissidents were frequently killed or vanished in places like Argentina, Brazil, Chile, Uruguay, and Haiti under Duvalier. Protest and dissent can result in a life sentence today in the Philippines, Turkey, and Russia. Therefore, defending even a tenuous pretense of “rights” influences the front lines of resistance and conflict. The equally significant corollary to this truth is that Black and Brown immigrant communities have traditionally lacked access to “democratic rights.” For instance, a DUI might result in deportation, while reacting violently to an unfair arrest can result in death.

This is why it counts if there are representatives like Cori Bush, Rashida Tlaib, or Ilhan Omar in Congress, or if a rational person holds local government as opposed to a proto-fascist. At the very least, keeping the extreme right out of elected office will ease some pain and provide activists some breathing room. It affects whether the Republican or Democratic parties control the House and the Senate. What counts even more is if we create a large-scale progressive movement to stand up for what our people need and deserve.

There are differences and similarities between the contemporary political environment in the United States and the years that preceded those terrible historical events. We are unable to bumble about life wearing “it can’t happen here” blinders.

It is alarming to see how far apart the right and left in the United States are on important issues, including what is objectively true. Similar divisions existed throughout other historical periods that produced significant breakdowns, such as the American Civil War. On fundamental principles like the right to bodily autonomy for women and transgender individuals, states differ from federal law. The Southern Poverty Law Center, Political Research Associates, and the ACLU have all documented the increase of illegal armed groups, which is what The New York Times is addressing in a series on political violence. The situation is grave. People who value freedom and justice must continue to vote, plan, and mobilize while being well aware of the enormous risks involved.