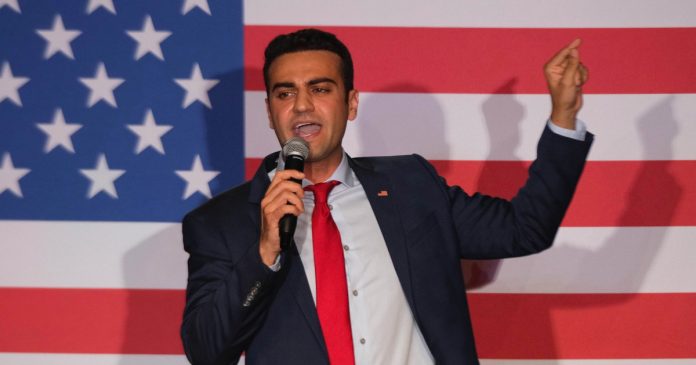 Abe Hamadeh campaigns to be the next attorney general of Arizona in Tucson on July 31, 2022. Christopher Brown/ZUMA

It was for good reason that the media gave considerable attention to the election-denying campaign of Arizona’s Trump-loving Republican candidate for governor, Kari Lake, the election-denying, militia-aligned, January 6 rally-attending candidate for secretary of state, Mark Finchem, and the techno-libertarian follower of a monarchist blogger trying to become a US Senator, Blake Masters. But when Arizona’s GOP slate rallied supporters in the days before the election, the one who came across as the most extreme was the 31-year-old Abe Hamadeh, the GOP candidate to be the state’s attorney general. More than a week after the election, Hamadeh is an election denier who could still win in Arizona. If he does, he could use his position to make it harder to vote and to get initiatives on the ballot while targeting groups that register and mobilize voters.

As of Thursday evening, Hamadeh trailed his Democratic opponent, Kris Mayes, by 236 votes. A small number of ballots remain to be counted across the state and the race appears headed for a recount.

Hamadeh won the nomination with Donald Trump’s backing and vociferously supported the Big Lie of a stolen election in 2020. During the campaign, he stood out on the stump for offering up the reddest meat, from critical race theory to calling the media “propagandists for the Democrats.” He promised to enforce a draconian abortion ban enacted by Arizona’s territorial government in 1864. Hamadeh also spread conspiracies about the 2020 election. “As AG I will prosecute the election fraud of 2020 and secure the 2024 election so when Donald Trump runs and wins again in 2024, everyone will know it’s legitimate,” Hamadeh told the Arizona Republic.

As the role of state attorney general has grown more prominent in recent years, more national money has flowed into these races. Republican attorneys general made names for themselves by suing the Obama administration over the Affordable Care Act and Deferred Action for Childhood Arrivals (DACA). “I go into the office, I sue the federal government, and I go home,” Texas Gov. Greg Abbott said of his prior job as the state’s attorney general.

After Trump won the presidency, Democrats ran for the office on the promise of fighting his policies. They sued the Trump administration over his inhumane immigration policies, environmental regulations, and more. Today, Republican attorneys general, with the help of conservative judges, are going after President Joe Biden’s policies, laws, and the power of federal agencies that conservatives have long sought to dismantle. In 2020, the Republican attorney general of Texas, joined by GOP colleagues in other states, asked the US Supreme Court to overturn Biden’s White House victory. (The Supreme Court declined.)

While attorneys general have gotten attention for taking their agendas to federal court, they also have significant powers in their own states. By electing Democrats as the next governor and secretary of state, Arizona voters avoided the nightmare scenario of election-deniers refusing to certify the election, picking electors that don’t reflect the will of the voters, or passing voter suppression laws. But as Arizona’s chief law enforcement officer, Hamadeh could still muck up election administration in 2024 and make life a lot harder for Democrats and progressives.

One way this could happen is by refusing to sign off on the state’s Election Procedures Manual, which clarifies important election administration protocols such as how to cure a signature mismatch on a ballot or the rules for gathering signatures to put a proposition on the ballot.

“This is the place where an election denier attorney general could really raise some havoc, which is not approving elections procedures,” says Jim Barton, an election lawyer in Arizona. According to Barton, the current attorney general, Republican Mark Brnovich, has refused to approve the latest manual, leaving the state with the 2019 manual and some open questions about election administration. One potential problem, Barton explained, is that a court has found that the 2019 manual’s protocols for registering circulators for ballot petitions were illegal. If Hamadeh wins and then refuses to clear up that situation, it will make it harder for groups to get initiatives on future ballots. This is an area of particular concern for Democrats and progressives; ballot initiatives are a key vehicle for bringing progressive policies to Arizona, and there are already plans for important initiatives, including an abortion rights ballot measure, in 2024.

The other major avenue for Hamadeh to interfere in the 2024 election is by launching bogus investigations and prosecutions of groups that help Democrats. One reason Arizona has trended blue in recent years is because of a massive organizing effort by multiple groups to get more people involved in the political process. The state’s Latino community in particular has been organizing through groups like Living United for Change in Arizona (LUCHA), whose turnout operations have helped secure Democratic victories in the state.

“Every year, there are complaints around groups that register voters,” says Barton, who has represented both the Arizona Democratic Party and LUCHA. “And those complaints are usually found to be false. But if you take those complaints at face value, and you suggest that maybe they’re showing a systemic problem, then you could really, really burden groups who are engaged in voter registration and get out the vote and that type of activity with investigations where you could say, ‘they’re doing something fraudulent’ or ‘they’re intimidating voters.’”

Targeting groups that register voters and help get them to the polls feeds into a narrative about voter fraud that the right has pushed for years. It is also a well-worn tactic for taking down these progressive organizing groups. Perhaps most famously, allegations of voter fraud against the national voter registration group ACORN became part of the 2008 presidential campaign and ultimately forced them to shut down, though allegations of registration fraud were unproven. In Georgia, now-Governor Brian Kemp used his position as secretary of state to investigate groups that help register non-white voters. In 2014, he used the same allegations that had taken down ACORN—fraudulent voter registration forms—to investigate the New Georgia Project, the group Stacey Abrams was running to register Black voters in Georgia. Three years later, the investigation closed with no findings of wrongdoing.

If he becomes attorney general, Hamadeh could follow the same template of going after community organizing and voter registration groups while fanning the flames of election fraud and Big Lie conspiracies that have taken hold in the Republican Party. (Ironically, Hamadeh may have committed voter fraud as a teenager, according to two online posts he wrote in 2008.) Hamadeh could take seriously the unbelievable reports of fraud put forward by the Stop the Steal movement and turn them into fodder for investigations, says Barton. A prosecutor’s authority “can be very dangerous.”