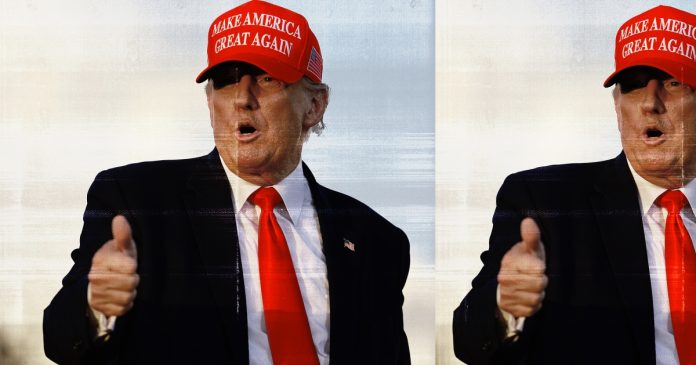 The announcement has been something of a foregone conclusion. Whole swaths of Republican voters still treat Trump as their de facto leader, including powerful GOP lawmakers who have embraced his election lies. Reports indicate Trump has radical plans, including a potential evisceration of the federal bureaucracy if he were to win again.

After months of teasing and tortured predictions over when Trump would finally release the American public from this unique purgatory, the defeated president’s announcement couldn’t have landed at a more precarious moment for him. A murder’s row of extremist candidates that he endorsed just lost their elections, often, catastrophically. Some of the losers: Mehmet Oz, Blake Masters, Joe Kent, Kari Lake, Jim Marchant, and Tudor Dixon.

This did not stop the former president from bragging that the Republicans won back the House of Representatives. “Nancy Pelosi has been fired,” he gloated. Still, the humiliating string of defeats, which prompted reports of vintage meltdowns and the return of “I am a Stable Genius,” has many in the GOP openly questioning whether Trump is still their guy.

Of course, it remains to be seen how long those equivocations will last; Trump has proven terrifyingly capable of escaping endless scandal. But while Trump flails playing defense, and an ascendant Ron DeSantis enjoys the glow from Florida’s newly cemented red-state status, I feel compelled to remind you of all the abhorrent racism, endless absurdity, unspeakable cruelty, and lies that we may once again be subjected to.

The glorification of violence.

The near destruction of asylum policies in the United States.

The end of Roe.

The rolling back of more than 100 environmental rules.

The anti-immigrant, xenophobic, and hateful policies of family separation.

The wave of new private prisons that cropped up in the wake of his immigration crackdowns.

The kowtowing to Vladimir Putin.

The kowtowing to the gun lobby.

The incitement of terrorism.

The mimicking and open embrace of authoritarian figures.

The relentless lying for the absolute dumbest bullshit.

The deadly failures and denialism as Covid ravaged the country.

The pernicious, baseless, conspiracy theories that eventually gave us something called QMaga.

The racist attacks on four congresswomen of color.

The humiliation on the world stage.

The blinding obsession with revenge.

The efforts to dismantle the Affordable Care Act.

The elevation of Roger Stone, the “ratfucker.”

The utter disregard for tribal sovereignty.

The late-career rise and constant—neverending—fall of Rudy Giuliani.

The attacks on the media.

The attacks on Black journalists, specifically.

The disrespect for military service members who were wounded or died in combat, including John McCain and the Khans.

The relentless boosting of weapon sales to Saudi Arabia.

The threats to go after protesters with “ominous weapons” and “vicious dogs.”

The parting gift to Washington: shitposters.

The campaign to steal a presidential election.