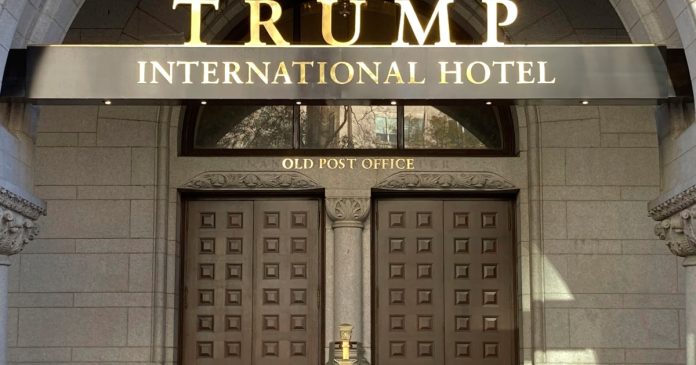 It was no secret during the Trump presidency that if you wanted to curry favor you should stay at Donald Trump’s swanky and controversial hotel when you were in Washington, D.C. In fact, at least 31 foreign governments booked rooms at the hotel during his time in office—and as the majority owner of the hotel (his adult children owned small shares) that was money that went straight into his pocket. Now, further details of just how lavishly foreign governments spent—often at crucial times for the causes they were taking up with the White House—are starting to emerge.

According to a letter released on Monday by the Congressional House Committee on Government Oversight, six countries in particular—Malaysia, Saudi Arabia, United Arab Emirates, China, Qatar and Turkey—all of which had complicated relationships with the United States, ran up at least $750,000 in bills at the Trump’s D.C. hotel. This happened  at “sensitive times,” according to the letter, when they were seeking diplomatic favor from the White House. And, the letter notes, that doesn’t count tens of thousands of dollars more that lobbyists for those countries spent during those same periods.

The letter is a request from the committee to the National Archives and Records Administration seeking details from Trump administration records to find out if the White House might have been swayed by the spending.

The standout example in the committee’s report is a stay by Najib Razak, then the prime minister of Malaysia, who visited the White House on Sept. 17, 2017. Razak’s trip came in the midst of a massive Department of Justice investigation into whether he had participated in the multi-billion dollar looting of 1MDB, Malaysia’s sovereign wealth fund. Set up by Razak in 2009, the fund collapsed as it was revealed that more than $4.5 billion had been embezzled from it—and in 2016, the DOJ indicated that prosecutors believed Razak had personally been responsible for personally pocketing as much as $731 million.

Despite this serious scandal and ongoing investigation, Trump invited Razak to visit the White House. Razak took him up on the offer and for the week prior to his visit, he stayed at the Trump hotel, where his delegation ran up a $259,724 bill. It included more than $9,000 on coffee, $8,000 on room-service lunches, and $1,500 on a personal trainer.

The Oversight Committee’s letter notes that at least two Americans who later pleaded guilty to charges of illegally lobbying Trump on behalf of the Malaysian government—Elliott Broidy, a California businessman and top fundraiser for Trump’s 2016 campaign, and Nickie Lum Davis, another GOP fundraiser—both paid to stay at the hotel during the same time period.

Other notable expenditures detailed in the committee’s letter include heavy spending (described as at least $164,000) by government officials from Saudi Arabia and the United Arab Emirates—while the two countries were seeking support for a blockade they had imposed against regional rival Qatar. At the same time, Qatari officials and connected companies spent at least $307,000.

The full report, which includes details of Turkish and Chinese government stays at the hotel, can be read here:

The new details may come as little surprise. Following Trump’s election victory in November 2016, transparency and ethics experts began clamoring for him to divest from his business empire to avoid this exact scenario. Trump staunchly refused—even as foreign dignitaries around Washington began discussing how they would seek to use the hotel to get the White House’s attention. “Why wouldn’t I stay at his hotel blocks from the White House, so I can tell the new president, ‘I love your new hotel!’ Isn’t it rude to come to his city and say, ‘I am staying at your competitor?’” one Asian diplomat told the Washington Post, just weeks before Trump took office.

Democrats and good-government folks went nuts over the situation: In addition to this opening up unprecedented opportunity to blatantly stuff the pockets of the most powerful man in the world, the property itself is owned by the US government. Prior to launching his presidential bid in 2015, Trump had won a competition to rent the property and redevelop it. Because the building was owned by taxpayers, and the lease to Trump was administered by the General Services Administration (the federal government’s landlord agency), congressional oversight committees had jurisdiction. Yet, they struggled to pry details loose about how much money the hotel was making from its affiliation with the president from the Trump administration, or from the Trump Organization, which was renting the hotel and managed the property.

During Trump’s time in office, his company promised to donate any profits from foreign-government visits to the property to the U.S. Treasury, a point reiterated on Monday by Eric Trump in response to the oversight committee’s letter. However, by the company’s own admission, it did a poor job of assessing how much foreign profit they really collected.

An internal document instructing employees on how to calculate foreign profits noted that any real attempt to figure out the identity of customers, and whether they represented a foreign government, would probably make the customers uncomfortable:

“To attempt to individually track and distinctly attribute certain business-related costs as specifically identifiable to a particular customer group is not practical, nor would it even be possible without an inordinate amount of time, resources and specialists,” the pamphlet stated.

The pamphlet also warned hotel management against prying too deeply when determining if customers were representatives of foreign governments, because “putting forth a policy that requires all guests to identify themselves would impede upon personal privacy and diminish the guest experience of our brand.”

Despite the free spending by customers like the Malaysian delegation, the hotel struggled to make money under the Trump brand. In fact, the then-president’s shiny new crown jewel in DC appeared to be a drag on the company’s bottom-line; during the COVID pandemic, the Trump Organization sought rent breaks from the government.