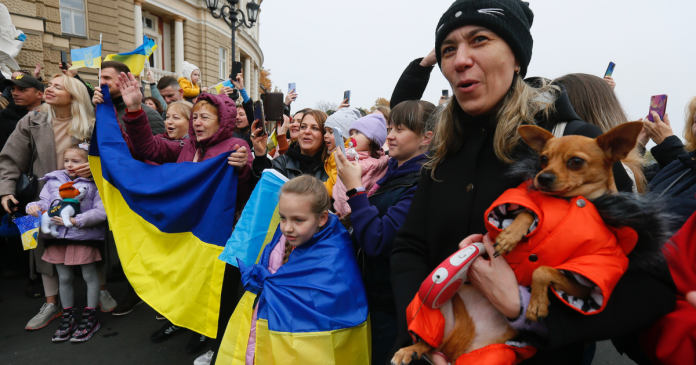 For nearly nine months, the people of Kherson, Ukraine, had been living under Russian occupation, with countless families forced to live without basic means including food, running water, and electricity. But after Russian troops suddenly announced a retreat from the city on Friday, scenes of joy have brought a reprieve from the brutality of the war.

Videos and images quickly began flooding social media, showing Ukrainians taking to the streets to celebrate a rare moment of peace in southern Ukraine, where the fighting between Ukrainian and Russian forces has been especially intense. The liberation of Kherson comes as a critical blow to Russian President Vladimir Putin, who just last month had declared Kherson among four Ukrainian regions to have been annexed into Russia “forever.”

One especially poignant video clip shared online by Myroslava Petsa, a Ukrainian journalist working for BBC News, showed a grandmother weeping with joy at the sight of her grandson, a Ukrainian solder:

The moment a grandmother kneels before her grandson soldier who’d been fighting for Kherson liberation. pic.twitter.com/f6JkBiPmMD

This thread – cellphone footage from Kherson and villages around, icl. Mykolaiv region on how people celebrate the liberation. How could anybody dare to abandon these people? #Kherson 1/14 pic.twitter.com/z6CE9D2fWk

Yet, the knowledge that the retreat is a humiliating setback for Putin added to fears that Russia will launch further onslaught. Speaking to reporters, Ukrainians expressed fears of Russian military retaliation: “Everybody expects something. Everybody is afraid,” a hairdresser told the New York Times, amid the celebration. Those concerns were echoed by Ukrainian President Zelensky, who urged Ukrainians to exercise extreme caution in the days ahead.

Still, Kherson residents, many of whom were seen showering Ukrainian troops with flowers, had plenty to celebrate after Russian soldiers announced that “Kherson cannot be fully supplied and function” in service of the Kremlin’s conquest. Meanwhile, President Biden praised the recent developments and said that they reflected the weaknesses in Putin’s operations.

“It’s evidence of the fact that they have some real problems, Russia, the Russian military,” Biden told reporters, adding a notable reference to the US midterms. “I find it interesting that they waited until after the election to make that judgment.”