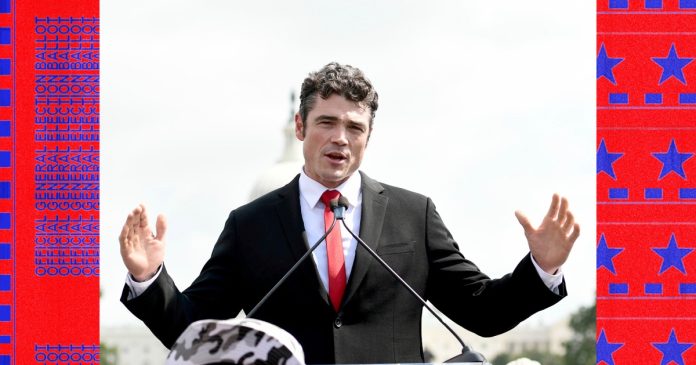 FiveThirtyEight’s final election forecast projected that Washington Republican congressional candidate Joe Kent would win by more than 12 points. Instead, in the biggest upset of the midterms, Democrat Marie Gluesenkamp Perez has carried the Republican-leaning district in southwestern Washington.

Gluesenkamp Perez is the kind of relatable candidate Democrats have often struggled to nominate in recent years. At 34, she is more than two decades younger than the average House member. After Reed College, she started running a Portland, Oregon, auto shop along with her husband. They live across the state line in rural Skamania County, Washington, in a home they built themselves. She’d run for office once before in 2016. Gluesenkamp Perez lost that race for county commission, but managed to run ahead of Hillary Clinton by 6 points.

In her first debate with Kent, Gluesenkamp Perez introduced herself as a practical small business owner who was struggling with the costs of health care, child care, and government regulations. Her opponent, she argued, was an extreme figure who lived in a social-media-warped reality while she ran her auto shop.

Kent had gotten into the race after Rep. Jaime Herrera Beutler, the Republican who currently represents the district, voted to impeach Donald Trump in the wake of January 6. In August, Kent and Gluesenkamp Perez advanced to the general election after prevailing over Herrera Beutler in an open primary. Kent’s main consultant was Matt Braynard, a prominent election denier, and his people were the ones who thought Trump won.

Still, Kent, 42, had the kind of personal story and charisma that should have assured victory in an off-year election. After enlisting in the Army as a teenager in the late 1990s, he became a Green Beret and served 11 combat deployments—mostly in Iraq. In 2019, his wife Sharon, a Navy cryptologist, was killed in Syria by a suicide bomber. He was comfortable in front of the camera and gave hours-long interviews in which he tried to make sense of his service and his wife’s death. “He’s got a very clean-cut, square-jawed sort of marketing,” Gluesenkamp Perez told the New York Times, “and if you’re not really paying attention, you’re going to get distracted by the hair.”

As I wrote last month, Kent’s service took him to dark places. He understandably felt that the US government had lied to him and fellow soldiers during the so-called War on Terror. But instead of joining the anti-war left, he came to embrace Donald Trump and his style of isolationism. His thinking skewed conspiratorial. The people in jail for storming the Capitol on January 6 were “political prisoners.” The Covid-19 vaccine was “experimental gene therapy.” Anthony Fauci needed to be charged with “murder.”

When I was writing about Kent, I assumed he would win despite those views. Gluesenkamp Perez was running a strong campaign, but, at least from afar, it was hard to imagine how any Republican would lose a district that Trump carried by 4 points in 2020. FiveThirtyEight, which was generally accurate in its predictions, put Kent’s odds of winning above those of Sen. Marco Rubio (R-Fla.), who now leads by 16 points. Still, I was wrong.

“I know the people in my district are looking for representation that focuses on finding common ground and delivering results, not the extreme hyperpartisanship and clickbait politics offered by my opponent,” Gluesenkamp Perez said in a statement Saturday. “They want their independent voice in Congress to be a small business owner and a mom who works in the trades, not an extreme politician seeking celebrity.”

The voters of Washington’s 3rd Congressional District preferred a grounded auto shop owner to someone who might have spent their time in DC trying to put Fauci in prison. In hindsight, it seems obvious.