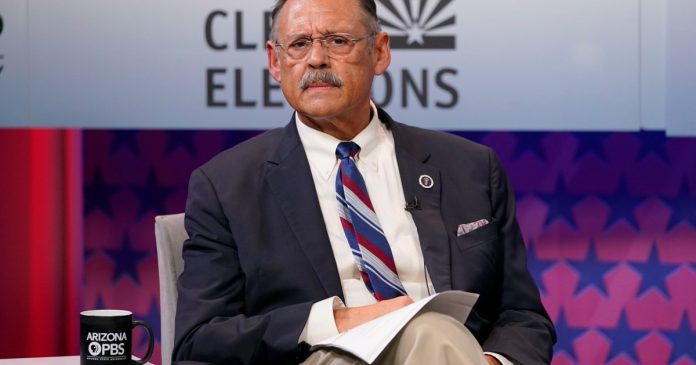 Arizona Secretary of State Republican candidate Mark Finchem sits prior to a campaign debate in September. Finchem lost in the general election on Tuesday.AP Photo/Matt York

Are you an election-denying secretary of state candidate? In a key battleground state? Then you might be having a difficult election year.

Election deniers running to oversee state elections did particularly poorly in the 2022 midterms—even in comparison to the underwhelming performance of the Republican Party more generally.

Almost the entire America First Coalition, for example, lost their elections. This MAGA-aligned group comprised more than a dozen secretary of state candidates who insisted the 2020 election had been stolen from Donald Trump. They included Arizona candidate Republican Mark Finchem and Nevada Republican Jim Marchant, both of whom lost last week. In addition, election-denying gubernatorial candidate Doug Mastriano was soundly in Pennsylvania, where the governor appoints the secretary of state. The only member of the group who won the general election was Diego Morales, in solidly red Indiana.

According to CNN, eight out of twelve election-denying secretary of state candidates across the country lost their elections.

Such candidates posed substantial threats to future elections through their professed commitments to use state power to intervene in the democratic process in favor of the GOP.

“When my coalition of secretary of state candidates around the country get elected, we’re going to fix the whole country, and President Trump is going to be president again in 2024,” Marchant said at a rally held by the former president in October. In August, a judge had thrown out Finchem’s lawsuit to try to get voting machines banned in this past election.

“It doesn’t really matter who’s running for assembly or governor or anything else. It matters who is counting the vote for that election,” Rachel Hamm, a member of the group who was running in California, said bluntly over the summer. (Hamm was defeated in the primary.)