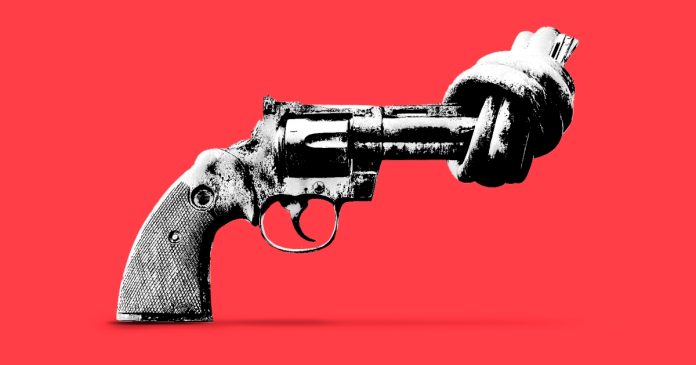 Leading up to the election, Republicans relentlessly blasted voters with campaign ads about crime, offering them brutal images of shootings and assaults and suggesting that if progressives got their way, murderers would run rampant on the streets and sex offenders would approach their children at barbershops. Journalists, too, fanned the flames, quoting voters across the nation who seemed terrified about the prospect of becoming victims. The only way to deal with the threats, some Republicans intoned, was to mount an aggressive and unforgiving campaign against criminals before the country devolved into chaos.

But amid the fearmongering, some Democratic candidates opted away from “tough on crime” messaging to focus instead on how they would change the criminal justice system, to make it more fair and effective. And on Tuesday, a substantial number of voters seemed willing to embrace their proactive vision: Perhaps to both parties’ surprise, many reform-minded candidates scored victories in the midterms.

In Pennsylvania’s closely watched Senate race, Democratic Lt. Gov. John Fetterman beat Republican Dr. Mehmet Oz after underscoring his work on the state pardons board, where he gave second chances to some incarcerated people serving lengthy sentences. In New York, Democratic Gov. Kathy Hochul staved off Republican Rep. Lee Zeldin’s allegations that she hindered public safety by supporting bail reforms. And in Minneapolis, in the first election for a county attorney since the murder of George Floyd in 2020, a former public defender and longtime critic of the police department won by a large margin over a former prosecutor with law enforcement endorsements.

Although Republicans with traditional “law and order” platforms triumphed in plenty of races, Tuesday did not bring the kind of election sweep they’d hoped for. “Fears that the crime-wave rhetoric would take down Democratic candidates just didn’t materialize at the national level,” says Insha Rahman at the Vera Institute of Justice, a nonprofit think tank focused on criminal justice issues. “Voters saw past the scare tactics.”

In more locally watched races, too, reformists performed well. Progressives won notable prosecutor elections in Texas (Hays and Dallas counties) and in Oklahoma City, where a former public defender who led the Oklahoma Innocence Project will soon be district attorney. In Los Angeles, though results are still coming in, a reform-minded sheriff candidate on Thursday held a sizeable lead over Alex Villanueva, the tough-on-crime incumbent, who was criticized for failing to crack down on violent “deputy gangs” within his department, among other scandals. And the city’s next controller, tasked with overseeing the local government’s coffers, will be a 32-year-old activist and accountant who put up billboards revealing bloat in the police department’s budget.

Meanwhile, in Massachusetts’ Bristol County, a Trumpist sheriff whose brutal jails earned him the nickname Arpaio of the East—a nod at the former strongman mayor of Arizona—was booted from office after a quarter century in power. So, too, was the judge in Louisville, Kentucky, who signed the falsified search warrant that led to Breonna Taylor’s death. And voters elsewhere approved progressive ballot measures: In Alabama, Oregon, Tennessee, and Vermont, they amended or removed language in their state constitutions that previously allowed slavery as a punishment for crime. In Maryland and Missouri, they legalized the possession of marijuana. I could go on with results, because progressives notched plenty of other wins.

Clearly, even as ubiquitous television ads, mailers, and news coverage led a large number of Americans to believe we’re living through a crime wave, says Rahman, there was never a death knell for justice reform: “Voters understand what actually delivers safety, and it’s not the rhetoric and scare tactics.”

Crime ads proliferated during the final months of campaigning, as Republicans looked for a way to attack Democrats who were gaining momentum after the Supreme Court gutted abortion rights over the summer. Conservatives, often without much evidence, blamed progressives for growing public unease over violence, pointing to homicides that spiked significantly during the first year of the pandemic and rose at a slower pace in many jurisdictions last year, even as other types of crime remained far below historic highs.

Democrats jumped on the defense, putting out their own tidal wave of TV spots on the subject. All together, both parties spent an estimated $85 million on crime ads after Labor Day, more than in recent years. And voters seemed to absorb these messages, with poll after poll showing that crime was a key issue as they prepared their ballots. Leading up to Election Day, the New York Times spoke with people in big cities and small towns who seemed horrified about lawlessness, claiming they were saving up to buy a security camera or even a bulletproof vest to try and keep themselves safe.

Though both parties touted their crime-fighting bonafides, Republicans had a more unified plan, pulling from a well-worn playbook of grisly (and sometimes misleading) videos of assaults and shootings. “It’s just fear, fear, fear,” says David Harris, a law professor at the University of Pittsburgh, who notes that many of these messages in Pennsylvania were designed to scare suburban voters whose odds of being victimized are low.

Democrats, meanwhile, struggled to present a cohesive strategy on public safety, according to political analysts and researchers, at times leading to confusion among voters. “You can’t name one or two clear phrases that encapsulate their approach to crime,” Rahman says. Many candidates responded to Republican attacks by distancing themselves from activist slogans like “defund the police” and assuring voters that they supported cops financially. Others pivoted away from the issue altogether, focusing on other subjects or pointing to the hypocrisy of Republicans—many of whom claimed to “Back the Blue” but cheered for January 6 rioters who beat police officers at the Capitol.

Some candidates tried to reason with voters, pointing out that their concerns about crime were not consistent with actual crime levels, and that homicides jumped in Republican-run areas just as much (if not more) than in Democratic-run ones. This political strategy—using data to explain why people’s feelings or fears are not based in reality—did not prove particularly effective, says Rahman, who cites the June recall of San Francisco District Attorney Chesa Boudin, a progressive who was accused of allowing “Gotham City-level chaos”—even as overall crime fell in the city, and even as the local homicide rate hovered far below other places of a similar size. “Perception is as important as reality,” she says, noting that year after year, a majority of Americans tell pollsters they believe crime is getting worse, even if it’s not. “Candidates have to acknowledge that if [voters] feel less safe, that’s an issue for elected officials to solve.”

In the end, however, these feelings did not hurt Democrats as badly as they could have. Though plenty of pre-election polls suggested that crime was one of the most pressing concerns for most voters, other priorities appeared to take precedence on Election Day: Early exit polls showed that nearly a third of voters nationwide (31 percent) cited inflation as their most important issue, while 27 percent cited abortion. About 11 percent, split relatively evenly between Republicans and Democrats, said crime was their top concern, while another 11 percent cited gun policy.

That’s not to say crime didn’t matter, or that Republicans who fearmongered had no impact. In Wisconsin, Republican Sen. Ron Johnson won reelection after attacking Democratic challenger Lt. Gov. Mandela Barnes for being “dangerously liberal on crime,” in a tight Senate race that could help determine which party takes majority control. And in Georgia, another battleground state, Democratic Sen. Raphael Warnock lacked enough votes to avoid a runoff against Republican Herschel Walker, who falsely claimed that Warnock disrespected police and cut their funding.

“Tough on crime” rhetoric scored other victories, too: Ohio and Alabama voters passed ballot measures that make it easier to jail people before their trials, while those in North Dakota, South Dakota, and Arkansas rejected drug legalization measures. In San Francisco, moderate District Attorney Brooke Jenkins, who took office after the recall, maintained a big lead on Thursday despite criticisms that she hindered prosecutions of police.

And in some cases, progressive wins were too close for comfort. In Democratic strongholds that previously enacted controversial justice reforms, such as Oregon, where a 2020 ballot measure decriminalized the possession of small amounts of illicit drugs, or New York, where lawmakers enacted bail reforms the same year, Democrats found themselves in unusually tight races against Republicans. New York Gov. Hochul, for example, won by only 5 percentage points. “You have to wonder,” says Rahman, “are these candidates either losing ground or losing entirely, as we’ve seen with the sweep of the New York House races,” because they did not do enough to assure voters that reforms and public safety can go hand in hand?

Going forward, Democrats still have a lot of work to do on crime. They “may have dodged a bullet by avoiding the anticipated red wave” this year, says Rahman, “but this issue will continue to rear its head,” and “they need to seize the opportunity with a more proactive approach.”

People crave solutions, not distraction or even data, and certainly not scare tactics. When the Vera Institute commissioned pollsters to ask how conservatives and liberals were thinking about public safety ahead of the midterms, and what kinds of campaign messages resonated with them, they found that voters across the political spectrum gravitated away from ads that focused on fear and toward ads that highlighted concrete fixes.

When these voters were asked to pick the top three or four factors that would make communities safer, the most popular answers were things like “people having jobs,” “quick first-responders,” “well-lit streets,” good housing,” “good schools,” and “my neighbors.” Other factors like owning a gun, installing more security cameras, and hiring more police came afterward. And, notably, only Republicans and Independents selected the option of “having more police,” even though nearly three-quarters of all voters, including Democrats, said they viewed law enforcement favorably. The vast majority of respondents wanted politicians to prevent crime, not just react to it. “Democrats should continue to lead with how they are supporting fairness, transparency, better use of resources, and why that improves public safety, and not just respond to these ads and say, ‘I’m tough on crime too,’ because that’s not the answer,” says Lauren-Brooke Eisen, a senior director at the Brennan Center for Justice, another think tank.

In Pennsylvania, for instance, soon-to-be Democratic Sen. Fetterman was rewarded when he embraced that strategy and aired a series of TV spots by law enforcement talking about his ideas to deliver public safety, including by reducing the prison population. “He didn’t run away from the issue and negate the attacks: He leaned into the issue,” says Rahman, paraphrasing his approach as: “I’m a Democrat and I’m running on my record on crime. I am here for safety and I am here for justice, and we can have both.”