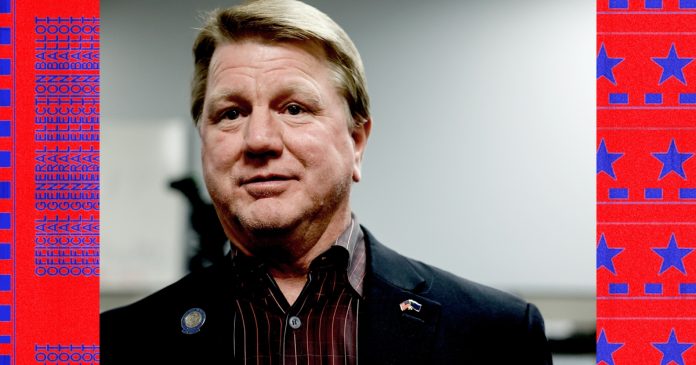 Last month, I published an investigation showing that Nevada Republican secretary of state candidate Jim Marchant was deceiving voters by wildly misrepresenting his business history. After the story came out, Marchant told fellow election denier Steve Bannon, “Mother Jones did some sort of colonoscopy on me and they came up with everything.” He contested nothing.

“Everything,” in this case, included a former employee who said he “would not want Jim to be secretary of a preschool,” overwhelming evidence that Marchant’s most prominent company quickly imploded, and previously unpublished divorce records that revealed that his career ended in financial ruin. Marchant was betting that it wouldn’t matter—having a R next to his name would be enough in 2022. He was wrong.

Marchant narrowly lost his race for secretary of state to Democrat Cisco Aguilar, a lawyer and former aide to the late Senate Democratic Leader Harry Reid. Marchant was one of the most extreme candidates running for statewide office this year. He claimed that all Nevada elections since 2006 had been rigged and that the winners had been “installed by the deep-state cabal.” Nevertheless, he nearly found himself in charge of all elections in the state. (Marchant didn’t answer when I called him on Friday evening to see if he was conceding.)

The origin story for Marchant’s campaign would have been unthinkable only a few years ago. In 2020, Marchant lost his race for Congress by more than 16,000 votes. Instead of accepting defeat, he claimed that he and Donald Trump had been victims of voter fraud. The day after the election, he checked himself into the Venetian so that he could work with Trump’s team to try to overturn the results of both contests.

His lawsuit to try to force Clark County, which is home to Las Vegas, to hold a new election was quickly thrown out. But while on the Strip, he’s said he received a visit from Wayne Willott, a fringe QAnon influencer who goes by the alias Juan O. Savin. Willott told Marchant to run for secretary of state in 2022 so that he could control Nevada elections. He also pushed Marchant to build a coalition of like-minded candidates in other states. Marchant followed Willott’s advice.

Despite being heavily outspent, Marchant won his primary by 17 points, and members of his America First Secretary of State Coalition prevailed in primaries in (among other places) Arizona, Michigan, and Pennsylvania, where the governor appoints the secretary of state. Like Marchant, all three of those election deniers lost their general election races this week.

During his general election race, Marchant insisted that Trump would return to the White House if he and his allies won. “When I’m secretary of state of Nevada, we’re gonna fix it,” he declared as Trump stood behind him at an October rally. “And when my coalition of secretary of state candidates around the country get elected, we’re gonna fix the whole country, and President Trump is gonna be president again in 2024.”

Along with promising to restore Trump to power, Marchant’s main selling point was that he was a “business guy” who’d founded “three very successful technology businesses” in Florida. The problem with the claim was that he’d driven his third company into the ground in 2001. Two years later, while still in his 40s, Marchant claims he went into early retirement. Soon after, he traded his life as a Florida man for a new one in Las Vegas.

In 2010, he submitted a financial affidavit as part of his divorce from his second wife. He listed no retirement savings, was making $2,500 a month, and said his business, an ice vending machine company, was worth zero dollars. As I reported last month, he also had $63,106 in credit card debt, another $30,931 of credit card debt in collections, and a $39,519 loan on a new Ford pickup. He was on the verge of losing both his homes in Florida and Nevada foreclosure proceedings. None of it stopped Marchant from claiming his “background in the technology business” made him “uniquely qualified” to be secretary of state.

In a follow-up story last week, I wrote about how Marchant appeared to be blatantly violating Nevada campaign finance law by putting himself in charge of a political action committee backing his own campaign. Bradley Schrager, a Nevada election lawyer who serves as campaign counsel for Aguilar, called Marchant’s actions the “most obvious case I’ve ever seen of a candidate simply not caring what campaign finance laws prohibit.” Had he won, Marchant wound have been responsible for enforcing those laws. Now that job will belong to his opponent.

On Thursday, Marchant appeared on Bannon’s show again. As expected, he hinted at foul play but came up short on details. “We need precision in language and precision thinking,” Bannon pressed, apparently frustrated by the quality of his foot soldiers. “How are we gonna get that?” Marchant wasn’t quite sure.

“Are you gonna go to court?” Bannon followed up.

“Well, that’s a good question,” Marchant responded. “I think money has a lot to do with it. I wish I had the money. I would do it myself.”

It was hard not to appreciate the honesty.