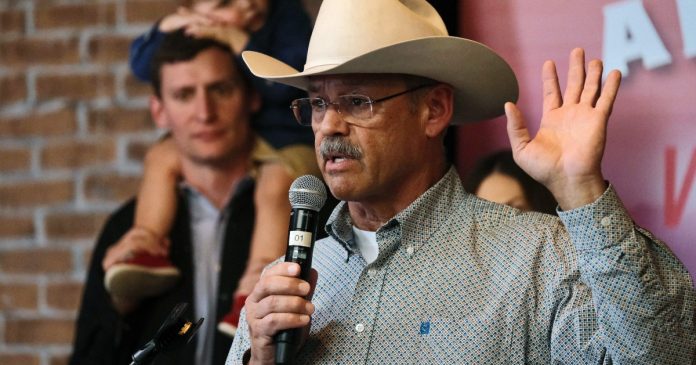 Mark Finchem, who has falsely claimed Trump won the 2020 presidential election, campaigns at an event in Tucson on November 6, 2022.Christopher Brown/Zumapress

The Republicans running for statewide office in Arizona, each among the most extreme in the country, earned endorsements from former President Donald Trump by peddling the lie that the 2020 election was stolen. But as three of these candidates campaigned in Tucson, Arizona on Sunday, they did not mention the 2020 election. Even Trump, who is about to launch his presidential campaign for 2024, didn’t come up. The stolen election conspiracies that carried these GOP candidates through the primaries seemed to have disappeared with the general election just days away.

Speaking at an office park to approximately 40 volunteers and activists on Sunday morning, GOP nominees Blake Masters for senate, Mark Finchem for secretary of state, and Abe Hamadeh for attorney general focused their criticism, instead, on the media.

“The media claimed that they are guardians of democracy,” Hamadeh said, making one of the few references to the issue. “They are the propaganda arm of the Democratic Party.”

Former Ambassador to Germany Rick Grenell, who was stumping with the Republicans, warned that the left was becoming a fascist movement thanks to the media. “Many civilizations implode from within when you have a media that is totally crushing dissent, canceling dissent,” he said. “Let’s be honest, we are literally seeing the beginning of a fascist movement from the left.”

At noon, the three candidates moved to a wedding venue near downtown Tucson for a rally. About 90 supporters were there, waving signs under a white gauze canopy with the letters “LOVE” on the wall.

This time, it was Masters who brought up democracy, but only to employ a favorite retort of the right: That the US is not a democracy, but a republic, which means that the country is not meant to be governed based on the majority vote of the masses. “The Democrats right now, they’re saying democracy is on the ballot,” Masters mocked. “Hey, we’re a constitutional republic.” It sounds like a nerdy takedown, but it’s being bandied with frequency by Republicans who also support minority rule and supported overturning President Biden’s 2020 victory. This line is especially loaded coming from Masters, who is an acolyte of tech billionaire Peter Thiel; Thiel has plowed millions into Masters’ campaign, has written that freedom and democracy are “incompatible,” and is a longtime supporter of a blogger who believes that the US should function as a monarchy.

Finchem, whose campaign has centered around the “Big Lie” that the 2020 election was stolen, was involved in efforts to overturn the results in Arizona and protested on the steps of the US Capitol on January 6, 2021. But on Sunday, his only mention of election meddling was directed at the Pima County recorder in Tucson. “So you have here in Pima County a lawless county recorder,” Finchem said. “It’s very clear that she wants to throw the vote, by her political rhetoric, by some of the actions that she’s taking. And the secretary of state that we currently have is not about to stand in her way.” Then he moved on.

These candidates’ avoidance of Trump and the 2020 election may be a sign that they’re aware that election denialism may alienate some of the more moderate voters they’re trying to sway. But even so, the Big Lie has helped bring each of them to prominence: In addition to Finchem, Masters claims Trump won in 2020 and Hamadeh won Trump’s endorsement and the nomination after saying he wouldn’t have certified the presidential election results. Democrats in Arizona are worried about the implications for election integrity if these candidates, as well as gubernatorial candidate Kari Lake—whose rapid political rise in the last year has centered on the Big Lie—are elected on Tuesday. They view the prospect of election deniers running the state as an existential threat to democracy.

Faith Ramon is a field organizer in Tucson for Living United for Change in Arizona (LUCHA), the grassroots organizing group that has mobilized Latinx voters in the state for over 10 years and helped turn Arizona into an election battleground. Increasingly, she says, voters are telling her that this is the most important election in history. What makes this year different, she says, is “who is on the ballot.” If the Republican election deniers win, she worries, “they have a lot of power to overturn an election.”

Ramon was leading a canvassing event on Saturday in the parking lot of LUCHA’s Tucson office. The crowd was small, about 20 people at first, and many were clearly old friends. The canvassing was done through an app called Impactive, through which everyone there was asked to text their friends and family about the election—a proven get-out-the-vote technique called relational organizing. “We have collective power, we have people,” Ramon said, “we just need them to show up.”

It’s LUCHA and similar grassroots groups organizing people of color who helped elect Democratic Sen. Kyrsten Sinema in 2018, and then turned Arizona blue in 2020 when voters elected both Biden and Democrat Mark Kelly to the Senate. But this year, the Republican Lake rode the Big Lie to her primary victory in the governor’s race and has helped generate enthusiasm for conservative candidates in the state down ballot. A former TV anchor, Lake is a polished speaker that brings charisma to her TV appearances. The Democratic gubernatorial candidate, Katie Hobbs, on the other hand, reads from her notes without magnetism. Hobbes is also the secretary of state who certified the 2020 election results in Arizona and faced backlash and even death threats from Trump’s supporters, some of whom protested outside her home.

On Sunday, Hobbs was also in Tucson, and unlike her GOP counterparts, she put the future of democracy front and center in her campaign. “We say, every election, this is the most important election in our lifetime,” Hobbes told a crowd at a senior center. “This is possibly the last election in our lifetime if we don’t elect the right people.” This year, she said, “democracy is at stake.”

The stolen election claim seems to have gone the way of abortion for the Republicans in the final days of the race: an issue on which they hold extreme positions but don’t mention them for fear of alienating voters. As my colleague Tim Murphy reported from Arizona recently, the Republican candidates in the state have virtually stopped talking about abortion access, despite years of work spent pushing to restrict reproductive rights.

But for Democrats, the threat of election deniers is hard to ignore. Hobbs’ experience in Arizona brings home that danger. While serving as an elections chief in a state where the effort to overturn the election was significant, she received severe threats to her safety after certifying election results that reflected the will of the people; if different people had been in charge, the outcome of the election might have been different. Asked after the rally if she is afraid about future threats against her safety while administering Tuesday’s election, Hobbs said yes.

That’s not what the Republicans want to talk about in the waning hours of this election. Yet if they win on Tuesday, their election denialism will likely animate much of what they do over the coming years.