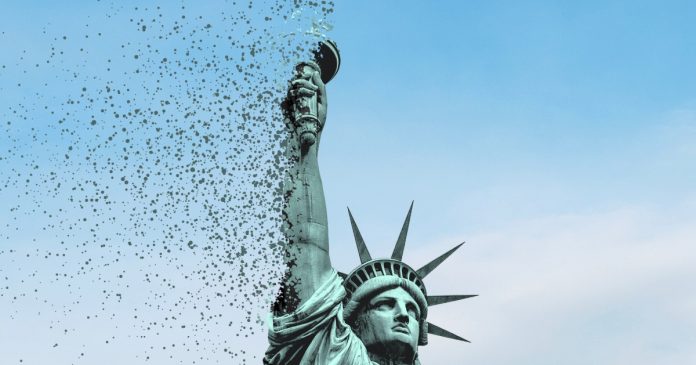 If you’re like a lot of the people I talk to in the Mother Jones community, the political world feels pretty dark right now—and not like the darkness before the dawn. Conspiracy theorists, liars, and authoritarians are gaining ground; further rollbacks of civil and human rights seem inevitable; powerful people, including the world’s richest man, are amusing themselves with jokes about hitting an 82-year-old man in the head with a hammer.

So imagine my surprise, the other day, when I heard someone with a unique perspective on all of this say, “It’s going to get better.”

Alessandra Orofino is a Brazilian organizer who happened to be visiting the United States just as Brazil faced its own consequential election. In a geographically vast, multiracial, complicated democracy an authoritarian-minded leader was running on “beef, bible, and bullets” and spending much of his time railing against “woke ideology.” It looked as if he might win.

And yet, Orofino was saying things would get better? “Maybe not now,” she explained. “Maybe three or four or ten years from now. But they will.” There was too much momentum toward democracy and freedom, she said, for them to be eliminated permanently. LGBTQ people were not going back into the closet. Women were not letting go of their rights. Workers were not giving up the chance for a better future.

In the moment—she was speaking on a panel about disinformation—Orofino’s optimism felt like a stretch. But she was right, and quicker than most of us would have guessed: Not only was the “Trump of the Tropics,” Jair Bolsonaro, defeated, he didn’t even bother to contest the vote, even though US election denialists like Steve Bannon begged him to. Brazil’s president-elect (again), Luis Inacio “Lula” da Silva, has his work cut out for him with a hostile Congress and a nation that is deeply polarized. But Brazilians did not let go of their democracy.

Nor should we assume that Americans will. We may come close in the next few years. But we have come close before. And today’s crisis is not the worst we’ve been through. Not by a long stretch.

Adam Hochschild, one of Mother Jones’ founders, looks at one of those earlier crises in a new book, which deals with a period often glossed over in history class—the years between the nation’s entry into World War I and the onset of the Roaring Twenties.

This was, as Adam puts it, “the Trumpiest time in our history.” It was defined by extraordinary repression, persecution, racist violence, and surveillance.

In Lincoln, Nebraska, a mafia boss named Tom Dennison orchestrated attacks on white women by white men in blackface to unseat a progressive mayor. Black World War I veterans were beaten and lynched. So were German Americans and those suspected of being Communists. Newspapers and magazines were censored and shut down by the postmaster general. Zealous military officials built a surveillance network to spy on resisters in the Philippines, then deployed them against dissenting Americans.

If you were on the receiving end of that vengeful repression, it would have been easy to conclude that the fight for democracy and human rights was lost forever.

But what if someone living in that moment could have heard from one of us living some 100 years later? Would they have been shocked that women would soon vote, that state-sponsored segregation would become illegal, that technology would make it possible for dissenting voices to reach millions through a device in our pockets?

No wonder there’s a backlash to all this progress, our friend from the past might say. Look at how much was accomplished in the century between you and us. And you have all these tools to fight the backlash in ways that we never could have dreamed of. Are you really about to give up?

How did “American Midnight” turn into dawn? Some of it, Adam says, was because those in power grew less fearful of progressive forces. The Socialist Party, the International Workers of the World, the countless magazines and newspapers advocating radical change—they were beaten back and became less of a threat.

But, Adam went on, some of the voices of change actually grew louder. An organizer named Kate Richards O’Hare organized “a caravan of the wives and children of political prisoners, who marched through the streets of more than a dozen American cities and demonstrated in front of the White House for two months, demanding the release of political prisoners.” They drew sympathy from the media and helped get all such prisoners released by 1924.

“The American Civil Liberties Union, born during the repression, went on to become one of the 20th century’s most influential civic organizations. Parts, at least, of the daily press, seemed to have learned the dangers of uncritically repeating whatever top government officials said. The Supreme Court slowly began issuing decisions more enlightened than its appalling [ruling] upholding the government’s right to prosecute the authors of an anti-draft leaflet.”

A few decades after the period Adam writes about, there was another crisis of democracy. In the 1950s, Sen. Joe McCarthy (R-Wis.) used lies and conspiracy-mongering to build a movement so powerful that even President Eisenhower, who loathed him, had to cater to it. My colleague David Corn chronicles that moment, when it became commonplace to wield “falsehoods and paranoia to cast political enemies as malevolent and nefarious threats to the nation,” in his new book about extremism in the Republican Party.

In its moment, McCarthyism was powerful, even overwhelming. (He drove a fellow senator to death by suicide!) But ultimately it did not prevail, and neither did the far-right movements that followed. Barry Goldwater tried to weaponize John Birch Society extremism and lost, notes David. “Reagan won with the help of far-right religious fundamentalism focused on gay-baiting [but] the gay-baiters eventually lost. Palinism did not carry the day. The Tea Party did in 2010, but Obama beat it back in 2012. Extremism is never totally wiped out. But it can be overcome.”

Every generation, it seems, gets handed its version of this challenge (and generation in this case means “everyone alive at this particular time,” not those marketing concepts designed to divide). We don’t have the benefit of visitors from the future to tell us how and when extremism will be overcome this time. But we can pay attention in the present, and take note of both the danger and the work that so many are doing to build a better future.

That’s what Mother Jones is going to be about in the months and years to come. We’re sure as hell not going to give up, and I know you all in the Mother Jones community won’t either.