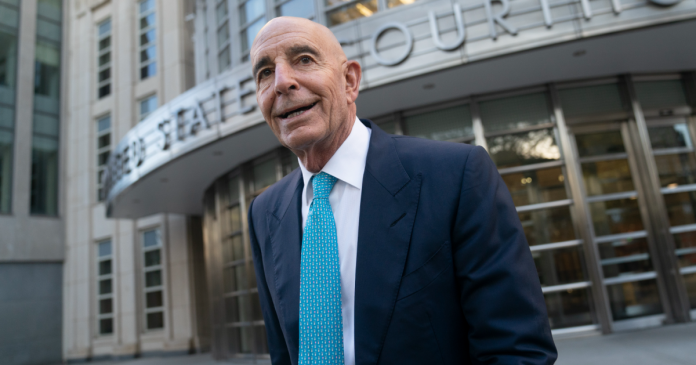 Tom Barrack, a fund manager and adviser to former President Donald Trump, was acquitted Friday of charges that he acted as an unregistered agent of the United Arab Emirates. The verdict was the latest in a string of recent blows to the Justice Department’s efforts to crack down on foreign lobbying.

Federal prosecutors presented evidence that Barrack had used his access to Trump to advance UAE interests between 2016 and 2018. Barrack did so, prosecutors said, at least in part to win large investments by UAE sovereign wealth funds for his firm.

But prosecutors failed to present evidence that Barrack had reached any agreement with the Emirates to work for them. The government had a “total lack of evidence” of a crime, Randall Jackson, one of Barrack’s lawyers, said in his closing argument.

Barrack, who testified in his own defense, and his attorneys seem to have persuaded jurors that his actions, whether or not ethical, were not against the law.

“God Bless America,” Barrack said in a statement Friday. “The system works. These 12 people, normal people with such complex, unbelievable facts in front of them, somehow fought through all of the quagmires to find Lady Justice with a torch burning, and a brilliant and committed Judge who protects them.“

Barrack urged Americans to “stop the politicization, whoever the President is, honor him or her and put all this garbage behind us. Tolerance and understanding is the magic elixir we need at the moment.”

The verdict was the latest setback for federal efforts to curtail unregistered foreign lobbying, which drew wide attention during the Trump administration. Last month, a federal judge dismissed a Justice Department lawsuit intended to force casino magnate Steve Wynn to register retroactively as a foreign agent for China. Wynn, who in 2017 served as the top fundraiser for the Republican National Committee, before resigning due to sexual misconduct allegations, personally lobbied Trump to order the extradition of Guo Wengui, an exiled Chinese mogul charged in China with corruption and fraud.

DOJ alleged that Wynn had advocated for China in a bid to secure favorable treatment by China’s government for casinos he controls in Macau. (Wynn argued he believed deporting Guo was in US interest.)  But US District Court Judge James Boasberg ruled on technical grounds that DOJ could not make Wynn register years after he had allegedly lobbied. The statute DOJ said Wynn violated, the Foreign Agents Registration Act, is different than the lobbying statute Barrack was accused of violating.

Justice Department prosecutors did charge and convict several former Trump officials with illegal foreign lobbying while Trump was in office: Former Trump campaign chief Paul Manafort and top Trump fundraiser Elliott Broidy were convicted of illegal foreign lobbying, while former national security adviser Michael Flynn admitted to acting as an agent for Turkey as a part of a plea deal. But Trump pardoned all those former advisers.

In addition, Greg Craig, a Democrat who previously served as White House counsel for Barack Obama, was acquitted in 2019 of making a false statement to the Justice Department about work for Ukraine’s government.