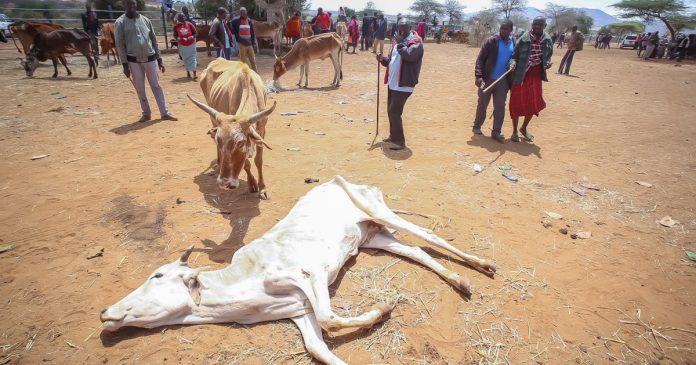 Sea levels are rising twice as fast as they were 30 years ago. Persistent drought in East Africa has plunged about 19 million people into crisis levels of food insecurity. Floods from record-breaking rainfall killed 1,700 people in Pakistan.

And yet global greenhouse gas emissions are still increasing, according to the United Nations’ climate agency.

As world leaders gathered in Egypt on Sunday for the start of the UN’s COP27 climate negotiations, the World Meteorological Organization released a bleak provisional report concluding that the “tell-tale signs and impacts of climate change are becoming more dramatic.” Despite a rare La Niña weather phenomenon keeping global temperature rise in check for three years, the past eight years have been the hottest ever recorded. Those rising temperatures are leading to “more frequent and severe extreme weather events around the world”: heat waves, floods, droughts, wildfires and storms. The report also tracks the vanishing of glaciers and ongoing ocean acidification.

“The melting [of ice] game we have lost, and also the sea level rate,” WMO chief Petteri Taalas told the Associated Press. “There are no positive indicators so far.”

Yet almost none followed through on an agreement to “revisit and strengthen” their targets, according to a Washington Post analysis. Today, carbon dioxide, methane and nitrous oxide are all at record levels, the WMO provisional report found. Methane, which traps heat 25 times more effectively than carbon, is rising at its fastest rate yet.

At this year’s talks, Al-Jazeera reports, rich countries are facing pressure from African nations to expand financial aid for low-income countries hit hardest by climate change, which bear little blame for the disasters they are experiencing. According to a UN report released last week, wealthy nations need to give 10 times as much as they currently do to help developing countries adapt to climate change—or else face the global ramifications of widespread suffering, displacement, and conflict.

“The idea that you can have a wall around your state and somehow protect yourself, so that you can adapt while everybody else will sink, or burn, or die in droughts, is simply unrealistic,” Inger Andersen, executive director of the United Nations Environment Program, told the New York Times on Friday.