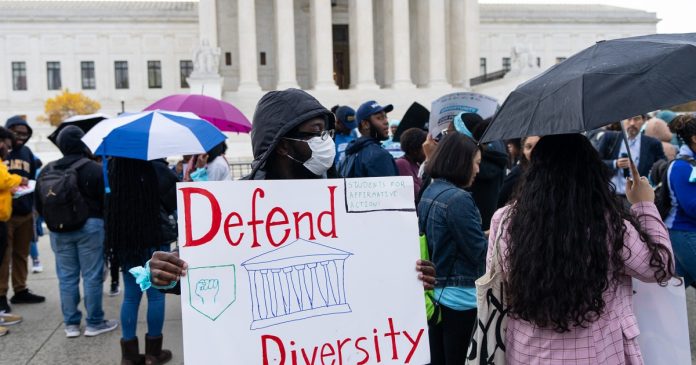 The conservative Supreme Court appears poised to ban the use of race in college admissions. During five hours of oral arguments on Monday in two affirmative action cases, all six conservative justices were skeptical of using race as a factor in college admissions. The cases invite the conservatives to rule that using race in any way is an affront to the Constitution and a form of discrimination against white people. And this view may prevail in a majority opinion from this 6-3 conservative majority. Several of the conservatives also proffered a seemingly less radical reason to end affirmative action: since it hasn’t solved the problem of low diversity and inequality on campuses, it is time to ditch it and move on. Justices Brett Kavanaugh and Amy Coney Barrett and Chief Justice John Roberts, who all like to appear more moderate in oral arguments, all sounded this same note.

“Achieving diversity and diverse student populations in universities has been difficult,” Justice Barrett said during arguments challenging race-conscious admissions at the University of North Carolina at Chapel Hill. “What if it continues to be difficult in another 25 years?… So what are you saying when you’re here in 2040? Are you still defending it, like, this is just indefinite? It’s just going to keep going on?” Her message was that affirmative action must end—even if the inequality it seeks to address is nowhere near over. When the going gets tough, just give up.

The Supreme Court has upheld race conscious admissions for nearly 50 years. In 1978, the Supreme Court ruled in a landmark case called Bakke that universities could consider race as one of many factors in admissions decisions. Twenty-five years later, in Grutter v. Bollinger, the Supreme Court affirmed the constitutionality of race-conscious admissions. This term, a conservative activist group called Students for Fair Admissions is asking the Supreme Court in two cases—one against UNC and the other against Harvard College—to overturn Grutter and prohibit any consideration of race in admissions. In her majority opinion in Grutter, Justice Sandra Day O’Connor expressed a desire for an end date to affirmative action and predicted that affirmative action would not be necessary 25 years into the future. On Monday, 20 years later, the conservative justices asked, what about that deadline?

Justice Brett Kavanaugh raised the 25-year marker in Grutter repeatedly, wondering whether it is the easiest offramp for affirmative action policies. “Without that time limit, when would [ending race-conscious admissions] otherwise be achieved?” he asked the lawyer for UNC. Rather than read the 25-year mark as an aspirational point at which race-conscious remedies will no longer be necessary, the conservatives pondered interpreting it as a hard expiration date. O’Connor “said race-conscious admissions programs must be limited in time,” Roberts queried during the UNC argument. “That was a requirement. So that part of Grutter should be disregarded?”

This argument could cut both ways: If the 25-year expiration date is taken seriously, as Barrett at a later point in the Harvard oral argument noted, then Grutter could arguably preserve affirmative action for another five years—a lease on life until 2028. Later still, Kavanaugh wondered whether allowing affirmative action past 2028 would in itself be overturning Grutter.

The question of the expiration date helps these justices dodge the real issue in these cases. Today’s conservative movement is animated by the idea that America should declare racism over and instead tackle the woke liberal ideology and critical race theory that threaten white people’s dominance in society. Justice Neil Gorsuch commented that Harvard’s race conscious admissions program is a form of discrimination on the basis of race. Justice Samuel Alito analogized affirmative action to allowing students of one race to start five yards ahead of other students in a 100-yard dash. By this logic from the justices, white people are being victimized; schools like the University of North Carolina should stop trying to remedy their history of segregation and just admit more white people already.

The effects of locking minority students out of elite universities are no secret. These schools serve as pipelines to leadership in government, politics, and private business. They lead to higher incomes and economic mobility. Significantly, affirmative action programs are crucial to giving people of color these opportunities. This has been proven in the places where affirmative action has already been banned: Both Michigan and California have struggled to bring Black, Hispanic, and Native students to their flagship public universities following bans on affirmative action, despite investing millions of dollars in recruitment. Likewise, Harvard and UNC argue that they need to use race as one factor in admissions decisions in order to maintain a diverse campus.

The conservative majority seem to have enough votes to end affirmative action. Some may hang this on an arbitrary deadline set two decades ago by justices unable to comprehend racism’s deep hold on American society. If the justices do take this step, it won’t be because they think it’s impossible to achieve equality or diversity; it will be because they don’t actually share that goal in the first place.