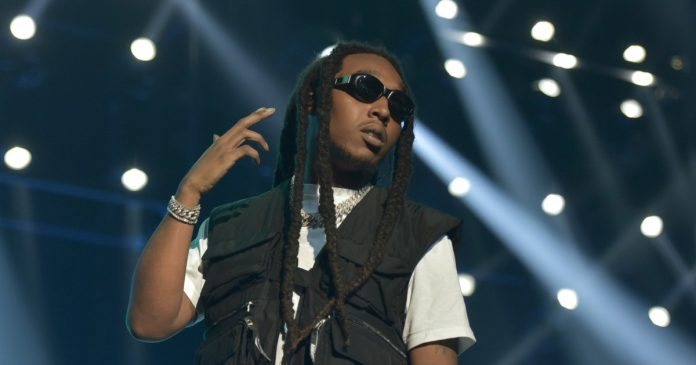 On Tuesday, the 28-year-old rapper Kirshnik Khari Ball, better known as Takeoff, was shot and killed at a bowling alley in Houston, Texas. He was a member of the influential rap trio Migos—whose songs include hits like “Bad and Boujee,” “Walk It, Talk It,” and “Motorsport.” According to local authorities, Takeoff was playing dice alongside his uncle and musical partner, Quavo, before he was fatally shot. The young rapper was pronounced dead at the scene.

Migos included Takeoff, Quavo, and his cousin, Offset. They began rapping in 2008, eventually finding mainstream success with the release of their hit song, “Versace.” The song is often credited with popularizing “triplet flow” (sometimes called “Migos flow“) a choppy, staccato style of modern rap music. It became the group’s signature sound and part of the tapestry of Atlanta, the de-facto headquarters of rap over the last decade. (If you’re not into rap music, you probably know them as one of the popularizers of “the Dab.”)

The group garnered both critical and commercial success through the mid-2010s, receiving two Grammy nominations, for best rap group and best rap performance in 2018. Takeoff later found his own success with his solo album, The Last Rocket, that same year.

There has been much public mourning. Gucci Mane, who recently collaborated with Takeoff on a song, wrote on Instagram, “This broke my heart.” BET also posted in memory of the artist, tweeting “Black Men Deserve to Grow Old”.

Rest in peace, Takeoff 🙏🏾 Sending our deepest condolences and prayers to his family, friends and community of people touched by his craft 🖤 pic.twitter.com/A1RkcrwyRZ

Some have also criticized media reporting of the death. TMZ, one of the first outlets to report the killing of Takeoff, included a gruesome video of the musician’s body being held by his friends after the shooting. While the video censored Takeoff’s injuries, you could still hear the piercing wails of those around him.

Still angry about those videos and images. I truly didn’t want to see that. And I think it’s disgusting that TMZ monetizes the deaths of Black men: Kobe’s accident, now Takeoff’s murder.