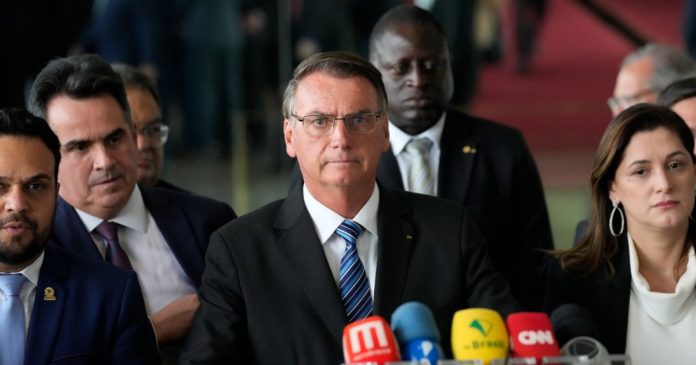 After almost 48 hours of a deafening silence, Brazil’s defeated President Jair Bolsonaro addressed the nation in a brief speech that only served to cement his already well-established diminished political stature. On Sunday, Bolsonaro became the first president to lose reelection after the tightest presidential race in the country’s recent history against President-Elect Luiz Inácio Lula da Silva, or Lula. Although he failed to openly concede the loss, Bolsonaro vowed to respect the Constitution and his chief of staff said he had authorized the beginning of the transfer of power.

At the Alvorada Palace, the official presidential residence in the capital of Brasília, Bolsonaro began his ambiguous two-minute statement by thanking the 58 million Brazilians—or 49.1 percent of the vote against Lula’s 50.9 —who voted for him. In true Trumpian fashion, he recognized as legitimate the anti-democratic trucker protests blocking highways across the country baselessly contesting the election results. “The current popular movements are the result of indignation and a feeling of injustice regarding the electoral process,” Bolsonaro said. “Peaceful demonstrations will always be welcome.” Without discouraging his supporters to continue to take to the streets, he did criticize the “methods” being used.

His refusal to acknowledge defeat signaled to his radicalized base, some of whom have embraced false claims of electoral fraud, to go ahead and attempt to disrupt the democratic process. In what some Brazilian politicians and pundits are describing as the “US Capitol à la Bolsonaro,” his followers led by truckers erected hundreds of road blockades triggering traffic jams and blocking access to airports, prompting Brazil’s Supreme Court to order their removal. “In the case of truck drivers, I understand this as a kind of Bolsonaro-style Capitol,” Marina Silva, former minister of the environment and newly elected federal lawmaker who endorsed Lula, said. “While with Trump we had an invasion of the Capitol, in the case of Bolsonaro, as he had no support for authoritarian adventures, he is manipulating people and segments that are strategic for Brazilian society, for the economy, in short, for the country’s supply.”

This is the first electoral loss in Bolsonaro’s political career, which includes a stint as city councilor followed by seven terms in Congress. But during his statement, the far-right populist tried to exit as a man in charge. “The right has really emerged in our country,” he said. After this election cycle, Bolsonaro’s Liberal Party will hold the highest number of seats in both chambers and his allies have also won important governorship races. “Our robust representation in Congress shows the strength of our values, God, homeland, family, and freedom. We shaped several leaders across the country. Our dreams are more alive than ever.”