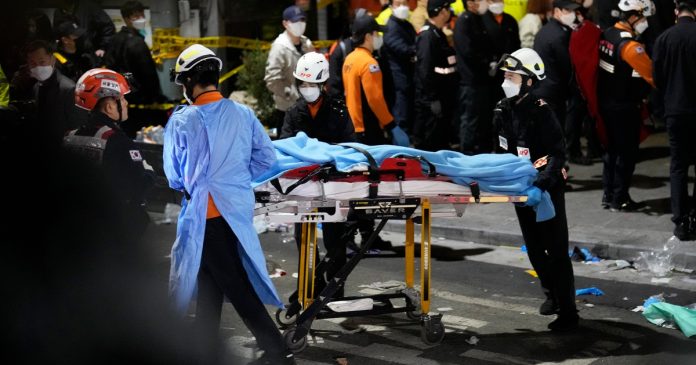 Scores were crushed and killed by a large crowd pushing forward on a narrow street during Halloween festivities in Seoul on Saturday night.Lee Jin-man/AP

At least 146 people were crushed and killed on Saturday night in a crowd that had gathered to celebrate Halloween in a popular nightclub district of Seoul, according to city officials, in what is now one of South Korea’s deadliest peacetime tragedies. At least 150 more were injured.

Television and social media videos of the chaotic aftermath showed streams of ambulances and hundreds of emergency workers rushing to help victims laid out in the streets of Itaewon, in central Seoul. Responders could be seen applying CPR to scores of bodies. Early reports suggest the tragedy unfolded outside a train station as a crowd surged in a narrow alleyway that is home to several bars, according to the New York Times, as thousands attended weekend parties in the densely packed neighborhood.

The victims were a mix of local and foreign partygoers in their 20s and 30s, according to local media reports cited by the Washington Post. Authorities have warned the death toll could climb.

The immediate cause of the incident is still being investigated.

This is a breaking news story. It will be updated as more details become available.