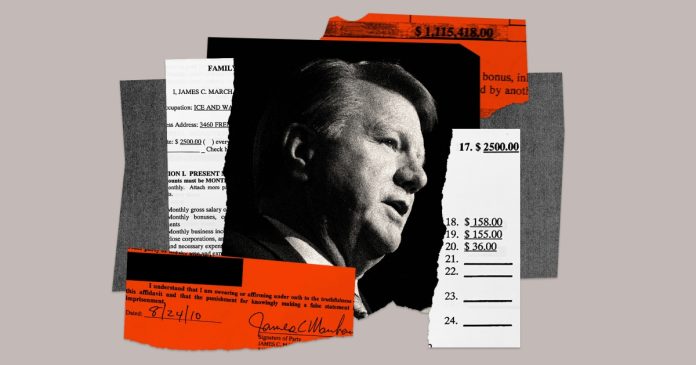 Jim Marchant, the far-right Republican candidate for Nevada secretary of state, sells himself as a skilled entrepreneur. “I’m a business guy,” Marchant has said in his pitch to voters. “I had three very successful technology businesses.” But previously unreported divorce records obtained from a Florida county courthouse—along with interviews of former employees, lawsuits brought against his most prominent company, foreclosure proceedings, and recent campaign financial disclosures—reveal that his career ended in financial ruin.

In a financial affidavit submitted during his 2010 divorce from his second wife, Marchant listed no retirement savings despite having been “semi-retired” for seven years. He also owed $63,106 in credit card debt, had another $30,931 of credit card debt in collections, and was paying off an additional $39,519 on a new Ford pickup. He put the fair market value of his business, an ice vending machine company, at zero dollars.

Nevertheless, Marchant, 66, has claimed that his “background in the technology business” makes him “uniquely qualified” for the job of secretary of state. While his first two businesses appear to have achieved moderate success, his third and most ambitious venture quickly folded and faced millions of dollars in court judgments. As one of its former employees, who asked to remain anonymous, told me about his old boss, “I would not want Jim to be secretary of a preschool.” (Marchant did not respond to multiple messages sent via phone and email to request an interview and responses to detailed questions about his business record.)

Marchant’s brief political career has also been a story of defeat recast as triumph. In 2020, he lost a race for Congress by more than 16,000 votes before insisting the race had been rigged against him and Donald Trump. He then checked himself into the Venetian hotel and casino to work with Trump supporters trying to overturn the results of both contests. While there, he received a surprise visit from Wayne Willott, a fringe QAnon influencer with whose work Marchant was apparently acquainted. (Against obvious evidence to the contrary, some QAnon followers believe Willott, who uses the alias Juan O. Savin, is the late John F. Kennedy Jr. in disguise.)

During a speech last year at the “For God & Country Patriot Double Down,” a conference organized by the QAnon group Patriot Voice, Marchant recounted how Willott told him to run for secretary of state instead of trying to get into Congress in 2022. That way, Willott reportedly explained, Marchant would be in charge of the state’s elections. Willott also pushed Marchant to form a network of like-minded secretary of state candidates to take control of elections across the country.

Marchant takes the stage at the For God & Country Patriot Double Down conference.

Members of Marchant and Savin’s “America First Secretary of State Coalition” might actually succeed. Earlier this year, Marchant won his Nevada GOP primary by 17 points, despite being heavily outspent. In Michigan, Kristina Karamo, who believes the election was stolen and claims pop stars like Ariana Grande are putting kids “under a satanic delusion,” is the Republicans’ pick for secretary of state. In Arizona, it’s Mark Finchem, a “poster child for election deniers” who was photographed outside the Capitol on January 6. In Pennsylvania, GOP election denialist Doug Mastriano, who organized buses to Washington, DC, that day, will select the secretary of state if he wins his race for governor.

Swing-state elections that hold dozens of electoral college votes in the balance could soon be overseen by right-wing conspiracy theorists. Marchant may have the best odds of winning of any of them. But his record has received only minimal scrutiny.

Marchant’s father, James “Cotton” Marchant Sr., was a Gainesville businessman who owned mini-marts in Florida. After graduating from Troy University in Alabama in 1978, Marchant started working in one of Cotton’s stores as a clerk before rising through the ranks of the family business.

In 1984, he started a software company that his campaign bio says served “customers nationwide.” According to a copy of his résumé from 2000, Marchant Business Systems mostly provided accounting systems to customers “scattered primarily throughout Florida,” along with meeting the computer needs of a payday lender in the state.

In 1995, Marchant launched Mercury Communications, one of Florida’s early internet service providers. In what Marchant claims as a career highlight, he asked Florida’s Department of Revenue if he was required to charge his new customers sales tax. The department ruled that he was. That led to a backlash from Marchant and others in the nascent internet industry, and the tax never wound up being implemented.

During the same period, Marchant helped start the Florida Internet Service Providers Association and became the trade group’s president in 1997. Joe Marion, who served as the group’s executive director during that period, said via email that he considers Marchant a hard worker who is being “honest” when he talks about building one of the country’s first internet providers and successfully lobbying against taxing internet access in Florida. Marion, though, hasn’t been in touch with Marchant in 20 years.

In 1998, Marchant sold Mercury, which had about 4,500 subscribers, for what his résumé described as “an extremely attractive price.” Marchant has said that he then raised roughly $17 million for Maxcess, his third and final technology venture. The initial goal was to quickly offer access to high-speed internet and internet phone service in Florida before expanding throughout the Southeast.

Instead, the company struggled to develop a functioning product and soon burned through its startup capital. In May 2001, less than three years after Marchant started the company, Maxcess stopped doing business and fired all its employees, according to a federal court filing.

The former employee said Marchant “drove it into the ground.” A second former employee, who also asked for anonymity, told me that new hires were encouraged to invest their own savings in the company, and that some put in significant amounts. This person remembers workers being encouraged to work for free after Maxcess was unable to make payroll, and that some did so for months.

In federal court, what was then MCI WorldCom sued Maxcess for defaulting on its contractual obligations. In a 2003 court filing signed by Marchant, both parties agreed that MCI had a legal right to foreclose on Maxcess property so that it could satisfy the $1 million judgment Marchant had accepted. Later that year, Marchant and his second wife informally split up.

In response to an August article from the Las Vegas Review-Journal about Marchant’s business history, campaign spokesperson Rory McShane said thousands of companies went out of business when the dot-com bubble burst. “Like any lifetime businessman, Jim Marchant has had his share of successes and his share of failures,” McShane said, “and all along the way never given up and never stopped creating jobs in Nevada and across the country.” (It’s unlikely that Marchant has created many jobs in Nevada; one of the selling points for his ice vending machines is that owning them doesn’t require having any employees.)

Marchant has claimed that he went into early retirement for a few years following Maxcess’ collapse. After learning that a cousin had invested in an ice and water vending machine company, Marchant moved to Nevada in 2005 to get into the industry. Although there is little record of what he did for work after first arriving in the state, he did maintain an active online presence.

In 2009, on The Diesel Stop, a forum for Ford truck owners, Marchant wrote that he was looking to buy an F-350. “[N]ow more than ever do I want to support Ford,” Marchant explained. “They have not taken any Obama money and have so far avoided being taken over by our Marxist Government.” Three months later, Marchant stopped paying the mortgage on his Nevada home, according to a Clark County, Nevada, court filing.

The next year, Marchant’s second wife officially filed for divorce. According to divorce filings, his liquid assets were limited to the $7,381 he had in the bank, but he had gone ahead and bought a new pickup. He held more than $1.1 million in debt and his net income was $2,150 per month. His now ex-wife, a licensed practical nurse, was in significantly better financial shape.

In 2011, after the divorce became final, Marchant turned over the deed of his Nevada home to avoid foreclosure. The same year, a different bank filed a complaint stating that he was no longer paying the mortgage on his Florida home. A court issued a foreclosure judgment.

The ice company Marchant listed during this divorce—Desert Ice—had a strangely rudimentary website. Archived versions of the now defunct page listed a phone number Marchant has used on Nevada voter registration forms, according to public records, and not much else. Clicking the YouTube button led to a 45-second video with a Nathan Fielder-esque soundtrack. More recently, Marchant has described the company, which appears to have at least three locations in Las Vegas, as a “little, small business here.”

In 2015, the Las Vegas Review-Journal reported that the “owner of a Las Vegas water and ice vending business” wanted to challenge the Republican Assembly speaker in a recall election. Marchant’s recall effort went nowhere. The next year, he did manage to defeat a Republican assemblyman and spent a relatively unremarkable two years as a state legislator before losing his seat in the 2018 blue wave. “I reached out to my opponent Shea Backus and congratulated her on winning the election,” Marchant wrote on Facebook about a race decided by 135 votes. He clearly didn’t doubt the state’s ability to count votes.

Instead of trying to win back the seat, Marchant ran for Congress. In 2020, Marchant submitted a campaign financial disclosure that put the value of his 50 percent share of Desert Ice between $500,000 and $1 million. It was a major shift from 2010, when Marchant stated under oath that the company was worth nothing. Despite the valuation, Marchant said he’d received no income from the company in 2019 and 2020. (According to a recent Nevada financial disclosure, Marchant has added one revenue stream since his last campaign: Social Security.)

After losing his House race by about 5 points, Marchant filed a lawsuit to force the Democratic stronghold of Clark County, which is home to Las Vegas, to hold a new election. He did not seek to have the Republican-leaning counties in the district vote again. A judge quickly threw out the suit.

In December 2020, Marchant appeared alongside six fake electors who signed a document stating that Trump had won in Nevada. A few months later, he announced his candidacy for secretary of state. He later told Margaret White, a Nevada mortgage banker who posts monologues and interviews with fringe figures on her personal website, that George Soros and “his cabal” had hatched a plan to rig Nevada elections back in 2004. He was “100 percent convinced that Nevada is a red state” and that conservatives would win in a fair election. For Marchant, Democrats winning elections in the state is itself evidence of fraud.

The first step for Marchant is prevailing in a state where a Republican presidential candidate hasn’t won since 2004. A recent campaign flyer presents his experience in the private sector as his main qualification for being able to run Nevada’s elections. “As Secretary of State,” it argues, “Jim will use his experience as CEO of three successful technology companies.”

Former employees see it differently. “As far as I know, Maxcess was a complete failure,” one said, pointing to the company’s debts and the fact that employees were pushed to work for free. “I don’t know how he could possibly call that a success.”