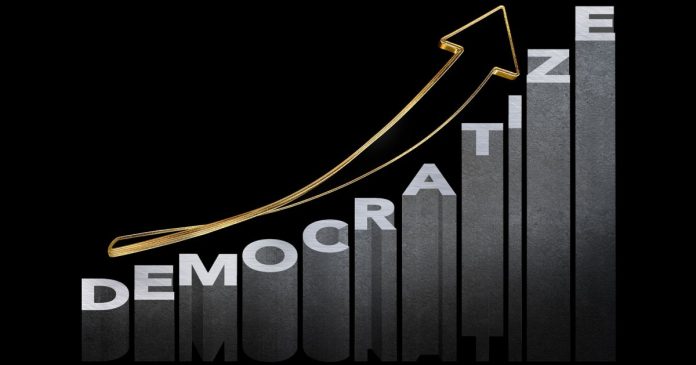 If you were cooking up a pitch for a tech company, you could do worse than “Our mission is to democratize X.” Many have used it in the past.

Democratize has two usual definitions: One is to bring democracy or democratic principles to a place. The other, and the usage that has infiltrated Silicon Valley, is to “make (something) accessible to a wide range of people.” For the past couple decades, tech companies and startups have used the latter version liberally, generally to mean they are hoping to make a product or service available at a low cost.

The word’s usage reflects optimism for a new approach to business dealings. In the 1990s, companies began centering their customers, often at the expense of other values. Over the next decade, Jeff Bezos’ signature “customer obsession” became mainstream. Companies sought to give users a voice, to make them feel like they were doing something with their purchasing power. With tech’s version of “democratization,” a concept rooted in politics and the public sphere was squeezed into a new container: that of the individual consumer.

This conscious capitalism became popular as customers were empowered to vote with their wallets, participating in a globalism that promised to end history. In books, usage of “democratize” spiked in 1918 (World War I ended and countries were becoming democracies), and again in 1947 (soon after World War II was over). But the highest peak for the word’s usage came in 2006, around the time Twitter was born, Google bought YouTube, Facebook was in its infancy, and the United States was claiming it was spreading democracy in the Middle East.

By the early 2010s, tech giants including Google were stirring together the language of business and civic engagement. According to Astra Taylor’s The People’s Platform, “In the 2012 ‘open issue’ of Google’s online magazine Think Quarterly, phrases like ‘open access to information’ and ‘open for business’ appear side by side purposely blurring participation and profit seeking.”

But, as Taylor warned, “Despite enthusiastic commentators and their hosannas to democratization, inequality is not exclusive to closed systems. Networks reflect and exacerbate imbalances of power as much as they improve them.” Putting something online, or making it cheaper, does not make it just.

Democracy has a positive social valence. An affiliation with the idea, no matter how oblique, is flattering. It suggests that a good or service—whether it’s a device that runs tests on a few drops of blood, or a one-click payment processor—is for the people. But despite lofty mission statements, companies have in the end hewed closely to traditional pathways for their purpose: making a profit.

Kendra Albert, a clinical instructor at Harvard Law School’s Cyberlaw Clinic, has studied “legal talismans”—terms like “free speech” that tech companies use to give legitimacy to decisions (say a failure to ban a user) that do not involve only legal processes. Democratization is a bit different, Albert says, since democracy doesn’t have a settled legal definition: “The lack of specific meanings for democratization is a plus not a minus in the sense that it basically allows companies to make it mean whatever they want, while still invoking this theme” of civic participation.

“Democratize” offers a synecdoche for an optimism that tech’s social goals and financial imperatives are aligned. And it helps that it looks great on a Squarespace landing page. (Squarespace wants to “democratize good design,” by the way.)

This casino gambled on geothermal—and hit the jackpot