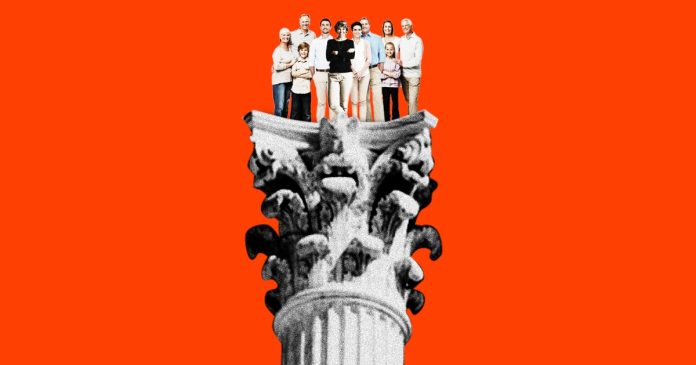 From Donald Trump’s MAGA movement, to the deadly white nationalist riot in Charlottesville, to Fox News’ fear mongering over critical race theory, white grievance has become an animating force on the right. Now, it has officially arrived at the nation’s highest court.

During this term, the Supreme Court will decide at least five cases that ask whether laws and policies enacted to protect racial minorities in fact victimize white people. In each of these cases, conservative activists and GOP-controlled states are making versions of the same argument: That the 14th Amendment, enacted after the Civil War to protect the rights of Black people, actually forbids laws that make society more equal. Through the cases runs the narrative that racism is over and woke liberals are discriminating against white people. The court, with a 6-3 conservative majority, is poised to agree.

In the first of these cases, which the Supreme Court heard on October 4, Alabama argued that the 14th Amendment, granting citizenship and “equal protection of the law” to people freed from slavery, is in conflict with the 1965 Voting Rights Act, which requires drawing political maps that give racial minorities a voice by ensuring lawmakers can’t draw districts to dilute their votes. By requiring states to take race into account when drawing voting districts, Alabama argues, the VRA violates the equal rights of white people by “favor[ing] one [race] over another.” (Notably, Alabama has historically drawn maps that empower white communities while splitting the state’s largest Black community across multiple districts—but denies that race is a factor.)

If the Supreme Court sides with Alabama, the result would be dramatic disempowerment of racial minorities, particularly in the South, on a scale not seen since the end of Reconstruction.

“Substantial minority populations in multiple States would likely lose their ability to elect representatives to Congress,” Harvard Law election expert Nicholas Stephanopoulos, who has studied how Alabama’s proposal for race-blind map drawing would impact people of color, explained in previewing the case. “And a similar pattern could play out in state legislatures, unwinding decades of racial progress.” And yet that is the outcome Alabama is asking for: Use the VRA and the 14th Amendment, both enacted to give Black people equal citizenship, to consign them again to the political shadows.

Alabama’s latest brief veers from the strictly legal to the sneering language more reminiscent of Fox News’ manufactured outrage over critical race theory to argue that racism is over and white people should not have to think about or feel guilt over the past.

“Plaintiffs assert that white Alabamians ‘have discriminated against [black Alabamians] for centuries,’ the brief says. “Of course, individual people cannot do anything ‘for centuries’; Plaintiffs’ narrative reduces individual Alabamians to members of competing racial monoliths and presumes that broad-brush claims about past discrimination can justify current laws that ‘favor[] one [race] over another.’” White Alabamians, the state argues, should be allowed to draw maps however they like, unburdened by the lingering effects of their ancestor’s oppression.

At the end of October, the court will hear two cases over race-conscious admissions policies at Harvard College and the University of North Carolina at Chapel Hill. Both cases were brought by Students for Fair Admissions (SFFA), founded by the conservative legal activist Edward Blum. (Blum has targeted both voting rights and affirmative action for more than a decade, making similar appeals to end policies that benefit minorities’ political and educational potential.)

In both affirmative action cases, Blum’s group makes the case that universities that use race as a factor in their admissions decisions to remedy past discrimination and build campus diversity are the real racists: “Americans sometimes treat each other differently based on race,” the group’s latest brief in the Harvard case states. “But Harvard should not be perpetuating that ‘unfortunat[e]’ reality.”

Students for Fair Admissions and the universities dispute the meaning of the 14th Amendment. “The Framers of the Fourteenth Amendment understood that race may be considered,” Harvard states in a brief, citing state and federal programs during Reconstruction to help freed people live as equal citizens after the Civil War. But SFFA dismisses this history.  These programs “were likely remedial toward former slaves,” SFFA responded. “But the 1870s are over.”As in the Alabama voting rights case, a key argument is that white people are no longer under any obligation to rectify the disadvantages ingrained through slavery and segregation.

While the universities see race-conscious admissions as a way to further equality, SFFA argues that using race in admissions is an illegal form of discrimination. SFFA claims that the 14th Amendment mandates “colorblindness,” calling the universities that use race when considering whom to admit the new segregationists. By insisting that the 14th Amendment and Brown v. Board of Education—the 1954 decision that required the integration of public schools—both mandate ignoring race, SFFA inverts history. The group claims these civil rights landmarks for themselves, then uses them to advance the interests of white people over people of color.

The Supreme Court sanctioned race-conscious admissions in a 2003 case that Students for Fair Admissions wants the justices to overturn. The group blames affirmative action for the trend of schools and businesses choosing to prioritize diversity, equity, and inclusion as well as for anti-racist curriculums—placing their mission to eliminate affirmative action squarely in the GOP’s culture wars.

“Deviations from racial neutrality have spawned more,” the group argues. “No wonder, then, that universities have spent millions erecting bureaucracies that specialize in ‘diversity, equity, and inclusion.’” SFFA then takes an out-of-context quote from Ibram X. Kendi’s  How To Be an Anti-Racist, a frequent target of the right, to boost their position: “Antiracism teaches that ‘[t]he only remedy to past discrimination is present discrimination.’ This open embrace of racial classifications has trickled down to K-12 schools—with disturbing results.” Those “disturbing results” SFFA warns about include critical race theory being “forced” on children.

The effects of affirmative action, the brief continues, don’t stop in education. SFFA decries diversity programs in corporations and points to one instance in which medical experts supported using race as a factor in allocating COVID-19 vaccines due to the higher hospitalization and mortality rates among racial minority groups at the height of the pandemic.

In invoking the many ways schools, corporations, and even the medical establishment consider race to improve outcomes for minorities, Students for Fair Admissions demonstrates what the right’s culture war is really about. This group’s goal is a society that ignores past oppression and forbids remedying its effects. This will lead to more white people in America’s universities and white-collar workforce, while outcomes worsen for people of color. That is the fairer society we should aim for, Students for Fair Admissions argues. The one the Constitution requires.

A week after the Supreme Court hears the two affirmative action cases, it will hear a dispute over the Indian Child Welfare Act (ICWA), a 1978 law that gives preference to Native adoptive parents over non-Native adoptive parents when Native children are placed for adoption. The goal of the law is to stop state child welfare agencies from taking Native children away from their families and communities and assimilating them by placing them with mostly white families, which was happening with alarming frequency when the law passed. At the time, an estimated 25-35 percent of Native children were being placed for adoption. Today, according to the National Indian Child Welfare Association, Native children are removed from their homes at a rate 2 to 3 times that of white children, and, despite the ICWA’s protections, “often are not placed with relatives or other Indian families, even when such placements are available and appropriate.”

The state of Texas and several adoptive parents are challenging the law on the grounds that its classifications of Native and non-Native violate the equal protection guarantee of the 5th Amendment, which mirrors the 14th Amendment. They argue that applying a unique standard to Native kids is a racial classification that causes them to be treated differently from children of other races in adoption proceedings. The division of the prospective adoptive parents into Native and non-Native classifications, they claim, is also problematic. “ICWA treats non-Indians as a politically disfavored class: they are placed last on preference lists for either adoptive or foster-care placements,” the latest brief from Texas states.

The federal government and several tribes dispute that the law classifies based on race. Instead, they argue that native and tribal status are political classifications. Indian law experts warn that reading race into the Indian Child Welfare Act is a backdoor attempt to strip away tribal sovereignty by reclassifying Native tribes as racial rather than political entities—an effort that would threaten tribal sovereignty and the laws and treaties that give them land and economic resources. For tribes, this is an existential threat. With that context, it becomes clear that in this case, too, the plaintiffs are using laws meant to undo racism against minorities to instead secure the wants of white elites: be those business opportunities on tribal lands or an equal claim to Native children.

The first law protecting the rights of Black people to access theaters, restaurants, transportation, and other businesses passed in 1875, securing the protections of the 14th Amendment. In December, the Supreme Court will hear a case that threatens these safeguards. The case concerns a graphic designer in Colorado who wants to create wedding websites for heterosexual couples while denying her services to gay and lesbian couples. This would violate a Colorado civil rights law that prohibits businesses from discriminating against LGBTQ people and other protected minorities, so the graphic designer sued.

If the Supreme Court rules in favor of the graphic designer, as expected, it could also enable discrimination by businesses based on race, sex, religion, and national origin. That door has been shut for decades, ever since Congress banned businesses from denying services to Black people through the 1964 Civil Rights Act. The Supreme Court upheld that law. More than five decades later, this case gives the court the opportunity to once again allow businesses to turn away customers whose identity they dislike.

These five cases reflect the arrival of the GOP’s culture wars at the high court. But the conservative justices have for years laid the groundwork for these cases; the briefs in support of striking down race-conscious remedies rely heavily on the decisions of the Roberts Court, as if they are simply asking the conservatives to finish the job they already started. Now, with a 6-3 majority, the path to redefining equality and victimhood is unobstructed.