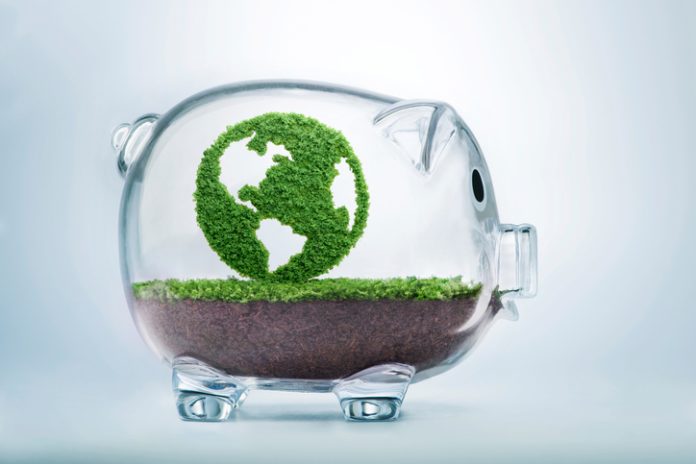 Grass growing in the shape of planet Earth, inside a transparent piggy bank.Pogonici / Getty Images

This piece was published originally by Capital & Main.

It hasn’t been the best season for the invisible hand, the 18th century principle that the market be left to its own devices free of government intervention. In August, President Biden took his right hand and applied his signature to the Inflation Reduction Act (IRA) — signaling that the government would be tipping scales in the economy toward renewable energy. While unanimous opposition from Republicans signaled their continuing lip service to that free market ideology, in truth they — along with some Democrats — have long manipulated the economics of energy by steering billions of dollars in public funds toward the fossil fuel industry.

Fossil fuel companies have received at least $20 billion annually in federal and state government subsidies over the past 10 years alone, and as much as $6 trillion from governments worldwide. U.N. Secretary-General António Guterres declared in September that the industry was “feasting off subsidies” while our planet burns. So there’s an important frame to the story of the IRA that’s worth remembering: The $141 billion it allocates to support wind and solar industries represents what is likely the first time that subsidies and tax credits for renewable energy in the United States have exceeded subsidies to fossil fuel companies — and is just about two-thirds of what the petrochemical companies have received from the government over the past decade.

The massive government support for oil and gas interests was largely missing from the reporting on the IRA, and is certainly worthy of greater media scrutiny moving forward. In the U.S. those subsidies come in the form of loan guarantees, tax breaks and discounted rates for drilling on public lands, and in some cases direct payments to explore for oil in difficult locales — all provided to the companies that are, collectively, most responsible for the massive and expensive climate disruptions being experienced on Earth. Identifying which fossil fuel companies receive those different forms of direct and indirect government aid would be a significant contribution to the public interest — particularly since the public funds the subsidies, and the public pays for the billions of dollars in damages to the economy from the companies’ greenhouse gas emissions.

The climate economist Richard Heede has identified the primary contributors to global greenhouse gas emissions, and it is a very small group. Apportioning responsibility for climate costs to any one company is, of course, difficult given the range of emitters. But when Heede reviewed CO2 emissions data from 1854 to 2010, he discovered that just 90 global companies are responsible for two-thirds of the emissions now wreaking havoc in the atmosphere. Among the top 20 global emitters from 1854 to 2010 are five U.S. companies, including the top two, Chevron and ExxonMobil.

We know their names and those of others, and the media can and should remind us of them with each new financial consequence — from the costs of fighting new diseases linked to increased heat to contending with the developmental impact on children of exposure to greenhouse gasses like nitrogen dioxide to rebuilding from extreme weather disasters, which the National Oceanic and Atmospheric Administration (NOAA) estimates to be at least $15 billion thus far this year alone, and could be as much as $128 billion annually by mid-century, according to the White House Office of Management and Budget. And that’s just one fraction of the damages which will, if current emission rates persist, only increase. NOAA recently issued a handy graph on the accelerating pace of “billion dollar” extreme climate disasters. And here are two sources on fossil fuel subsidies and the industries that bear significant responsibility for those costs: Oil Change International and the Environmental Integrity Project.

This great piece in Nature gets as close as I’ve seen to an explanation for why the helping hands given to the petrochemical companies can be difficult to report. Fundamentally, it’s because they’re so deeply woven into obscure tax codes and provisions of the national budget. Challenges notwithstanding, there are many vital stories to be written on taxpayer-supported handouts to oil and gas entities.

The pressures of climate change are revealing how the myth of the so-called invisible hand has long concealed what is in fact a highly manipulated energy market. This became quite visible when, in the runup to the passage of the IRA, 15 states pulled back the curtain on just how much the “free market” deck is stacked. Politico detailed how West Virginia’s Republican state treasurer was about to place at least six major financial firms on a blacklist for state funds due to their attempts to, slowly but steadily, shift their investments away from fossil fuels. By the time Biden signed the IRA, in August, the state treasurers of at least five other states — Texas, Florida, Louisiana, Oklahoma and Florida — had also established, or announced their intention to establish, their own often overlapping blacklists of financial firms retreating from fossil fuel investments.

Among the blacklisted companies are Wells Fargo, BlackRock, JP Morgan Chase, Morgan Stanley and Goldman Sachs. More Republican-led states are likely to follow. Most of the state funds in question are tied to employees’ pensions, which means the retirement funds of state employees will be even more directly exposed to accelerating climate risks — as the state treasurer of Oregon pointed out — than they already are. (At current emission rates those costs would likely cut global economic output by 10%-14% by 2050 — amounting to as much as $23 trillion — according to the global insurer SwissRe, which has its money on the line with such predictions.) The head of Ceres, an NGO that has been pushing climate disclosure rules for years, captures the “blatant lie” at the heart of the actions of West Virginia and the other states.

Oklahoma’s Republican governor, Kevin Stitt, declared that the blacklist bill would put an end to what he called “energy discrimination.” Which is another way of saying that the state should go back to discriminating in favor of oil. That mix of tax breaks and subsidies to the fossil fuel industries has amounted to as much as $500 million annually in recent years, according to an Oklahoma Policy Institute newsletter.

The question that would no doubt lead to an overflow of revealing stories in the 16 states where such initiatives are either complete or in motion, not to mention other fossil fuel-producing states, is this: In what ways has government favored oil and gas companies, and does that constitute “discrimination” against renewable energy companies?

Answers to that question might be the final bite to the myth of the invisible hand that’s been grifting us for more than two centuries.

Meanwhile, tensions are rising for the financiers, caught in a climate pincer: Those very same blacklisted companies, and many more, will soon be contending with a new set of reporting requirements from the Securities and Exchange Commission, set to take effect in January. The SEC’s proposed new guidelines will require that publicly traded companies report to shareholders the “material” risks they face from climate change.

For financial firms like Goldman Sachs, Chase Manhattan, Bank of America and others that are on the evolving Republican blacklist, that will include the risks faced by the companies they loan money to or invest in. Climate change is hitting the bottom line, and the SEC wants those financial exposures no longer hidden.

I have no great sympathy for the financial community. But consider this: These corporations now face two converging and contradictory forces that foreshadow trouble ahead. On the one hand, they are under pressure from states controlling access to potentially multibillion dollar accounts not to pay attention to the mounting economic consequences of climate change. On the other hand, the SEC is telling them to pay attention to precisely those pressures in order to produce an accurate portrait of their financial prospects.

These colliding imperatives will compel some of the nation’s largest financial firms to decide between defying the SEC — which would subject them to potential sanctions for nondisclosure of financial risks — or defying the rules of nearly a quarter of the states, and losing potentially billions of dollars’ worth of public fund accounts.

There will be great opportunities for high-impact media coverage as companies maneuver through those converging pressures and the vice tightens. What, if anything, does JP Morgan Chase do to regain its hold on millions of dollars it handled for West Virginia government pension funds, and the funds of other states withdrawing their assets on climate grounds?

More such questions — and storylines — are coming down the pike as even the bland rating agencies discover the climate backlash. For example, how do businesses in Utah and Idaho respond to the declaration by those states’ financial officers that they will not be bound by the creditworthiness ratings of S&P Global due to the willingness of that company, one of the stalwarts of the U.S. credit business, to incorporate environmental and social factors in its ratings of companies’ financial health?

All of which raises another question as climate disruptions to the economic order accelerate: If shareholders will now be informed about the very real risks from climate disruptions to the U.S. and global economy, what about the rest of us? What, for example, are the consequences of the rising cost of peaches and cherries and other immovable tree crops as temperatures rise, chill hours (key to ripening) fall, and fruit quality and quantity decline? …the diminishing value of a condo on the coast of Florida after the devastation of a hurricane and the likelihood of more to come as sea levels rise? …the increased cost of crop insurance for farmers and the impact on food prices? …the costs to school districts forced to install air conditioning units in their classrooms?

Climate change is causing the creation of divergent economies — those that recognize how profoundly it alters calculations of risk and economic fortune, and those that refuse to acknowledge those risks even as the costs rise. Blindness to financial risk would be a sure sign that a CEO has lost his or her business savvy. Abundant reporting opportunities lie in the split reality emerging between those who acknowledge the risks ahead and those who fail to see them.