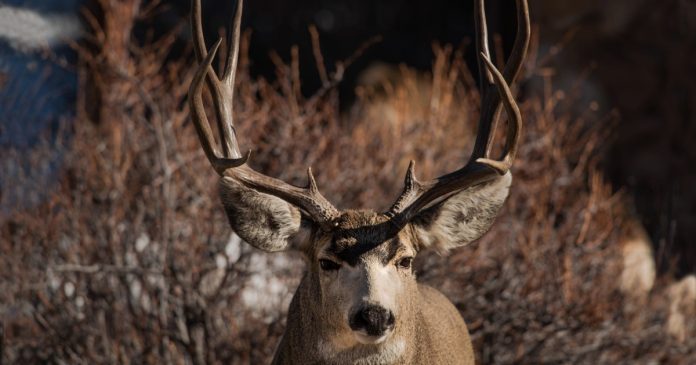 In late spring, as the days begin to lengthen, the mule deer of central Wyoming begin to “surf” the sagebrush landscape. Their break is found in the low flats where they spend their winters. That’s where the first buds of greenery erupt, offering a fleeting burst of food that’s rich in protein and easy to digest. These tender shoots go away quickly, but the bloom keeps moving, rising steadily uphill as the spring warmth reaches the harsher climes. As this “green wave” of vegetation crests, the mule deer ride it. Sometimes they’ll travel hundreds of miles until they reach their summer range. Ideally, they’ll time their journey perfectly, storing up enough fat on their rumps to last through the brown summer and barren winter ahead.

But in recent years, at least one group of mule deer has found this wave harder to catch. They set off with the first greenery, but then the journey halts; they dawdle for days as the budding flora gets ahead of them. The culprit, according to research published last week in Nature Ecology and Evolution, is humanity. Specifically, the development of two natural gas fields along the deer’s route, which created a din of activity, including drilling, explosions, and trucks. Even though the animals only spent a brief time near the rigs, the researchers found, the disruption had an enormous effect on their crucial spring transit—one that the researchers expect to translate into less fat, fewer babies, and higher mortality.

What surprised the researchers is how hard the deer have found it to adapt. Even though conventional wisdom holds that the disruption of oil and gas development should abate after the initial sounds of exploration and drilling go away, the deer seemed to be continually bothered by the ongoing activity. They also appeared to have difficulty picking a better route around the new obstructions. They had learned the ideal path of migration, and they stuck with it. “They’re sensitive,” says Ellen Aikens, an ecologist now at the South Dakota Cooperative Fish and Wildlife Research Unit who led the study. “They’re not so flexible in where they go.”

The study examined the individual movements of dozens of mule deer, captured over the years using helicopter-mounted net guns and flown to a location to be fitted with GPS collars. “It’s no small undertaking to get a collar on an animal,” says Teal Wyckoff, a coauthor of the study who now works for the Nature Conservancy. The goal, she says, was to shed light on the movements of populations that had been inscrutable to researchers, in an area where the researchers were anticipating a rapid boom in development. The tracking project began in 2005, just as companies were descending on Wyoming to extract methane from the region’s coal beds.

As a species, the mule deer of the American West are not particularly threatened. But they play a key role in what Mark Hebblewhite, a researcher at the University of Montana, calls “resource flow.” As they migrate, the deer chomp on fast-growing plants that would otherwise choke out other flora, and they themselves become prey for the charismatic species that people are more likely to rally to protect, like the gray wolves and grizzlies found in Wyoming’s national parks. Their abundance also makes them a useful tool for research, offering lessons for other migratory mammals whose movements scientists know even less about.

“We forget that migration isn’t like commuting from your house to the office,” says Hebblewhite, who wasn’t involved in the research. “It’s like you have to commute for a month and eat along the way or else you die. This study shows that you’re not going to get there, or you’re going to arrive at your office starving to death.”

In general, it’s surprising how little ecologists know about why large animals choose their migration paths. The motivations for moving are obvious, and include things like food, water, and a safe place to raise young. But how herds or animals learn their routes is a major debate. Evolution plays some role. There are signs of genetic predisposition in birds, for example, which may grow restless in their cages when the seasons change, even if they have always lived in captivity, and in insects like the monarch butterfly, which takes the same path for Mexico each year. But in mammals, that kind of genetic programming is harder to see. Their movements seem more heavily influenced by the particulars of their environment, and what behaviors they’ve learned from the generation before them. A young mule deer, for example, will learn the path taken by its mother down to the meter.

Recent research has bolstered the idea that hooved animals like mule deer develop these migratory routes in part by surfing the green wave. In maximizing their daily calories, they learn how to move with the seasons. Attempts to repopulate the American West with bighorn sheep offered a natural experiment for the idea, because the animals transported in to do the repopulating had no particular mental map of their new habitat. Initially, they preferred to stay put, a team of Wyoming-based researchers found. But gradually, the spring shoots proved irresistible, and they began to draw the animals out to explore new territory. Over time, they became better surfers, and those migratory routes were then passed on to their young.

The results of the mule deer study indicate that once animals have learned an ideal path, it can be hard for them to shake. And therefore, any sort of obstruction presents a problem, as researchers have found in prior studies. “The animals that migrate the longest distances and are the best surfers consistently have the highest body fat,” Aikens says. “Those are the ones that are most likely to survive the harsh winter.” The research team next plans to capture some of the animals involved in the study and measure the thickness of their fat using an ultrasound machine.

The results hold lessons for the sustained effects of development on other migratory species. That includes caribou, for example, which Hebblewhite studies in Canada’s far north. While somewhat better at changing up their routes, he says, they still face declining populations as immense mining and fossil fuel operations create a thicket of obstacles along their paths.

To Hebblewhite, the Wyoming findings highlight the importance of factoring in migration patterns when considering development—not only for oil and gas, but also for clean energy installations like solar farms. While those routes may at times be inconvenient for developers, not all is lost, he points out. The majority of the deer preferred to walk through the two gas sites that appear in the study, but the maps of migratory paths show plenty of empty land where no deer roam. A developer could put wells there and drill laterally to reach the natural gas underneath the migration paths, he says: “This paper highlights that you could have avoided their routes. It doesn’t mean you have to shut down everything.”

As more GPS data becomes available, animals’ surfing routes are already increasingly being taken into account in development decisions, Hebblewhite adds. State and local governments are often receptive, he says, due to the importance of hunting to local residents and a growing understanding of the interconnectedness of ecosystems—that if you care about the natural wonders of Yellowstone, you may have to also care about what happens to a mule deer in the scrubby sagebrush flats hundreds of miles away. The challenge, Aikens adds, is getting this kind of detailed data for more animals and in other parts of the landscape where people may want to build. “It’s surprising how little information is available in many places,” she says. “That’s something that there’s an active effort to change.”