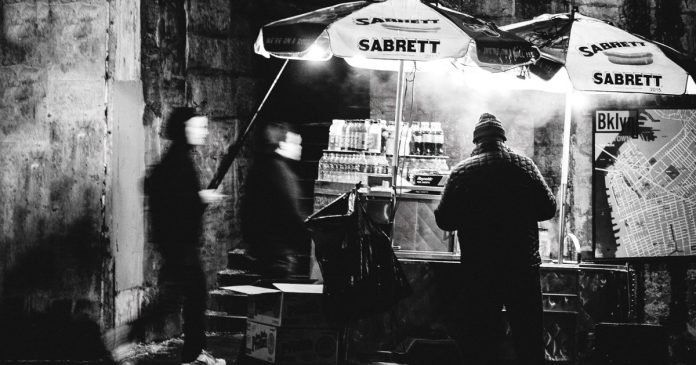 When Cleotilde “Cleo” Juarez Ramirez emigrated to the United States from Puebla, Mexico, she thought she’d left her years of street vending behind.

Once settled in East Elmhurst, Queens, her husband, brother and uncle all found work that allowed her to care for her children at home. But after they lost their jobs at the start of the pandemic, Ramirez knew that without their income, or pandemic government relief that excluded hundreds of thousands New Yorkers who are undocumented, she would need to help support her family. In the summer of 2020 she returned to the work she’d left behind, setting up shop on Junction Boulevard in Jackson Heights—what locals call Puebla York—to sell homemade chalupas at a stand outfitted with serape blankets.

To do so, Ramirez had obtained a street vendor license, a photo ID badge issued to individuals who serve and sell food at street carts; but she is one of the thousands of street vendors in New York City who have been unable to obtain a legal permit for the stand on the curb, described by the Department of Health and Mental Hygiene (DOHMH)—that issues the permits—as a “mobile food vending unit.”

Many of the street vendors who sell food on the sidewalks of New York City are licensed, having submitted a mandatory $50 application fee and having completed an eight-hour DOHMH “food protection” course that details required health and safety protocols for mobile food vendors. But for the past 40 years, the next step, getting a street vendor permit, has been exceptionally difficult: very few street vendors are able to obtain a legal permit for their carts, due to a decades-old cap on the number of permits issued. For the majority-immigrant population that relies on street vending for their livelihoods, the cap is a barrier to making a legal living. Vendors have been fighting to lift the cap for years and, in early 2021, at long last, it seemed like a real possibility.

In January 2021, City Council passed a law to radically expand the permits available. The law, enacted a month later, promised to introduce 445 new permits (now called supervisory licenses) into the system every year over the next 10 years, doubling the current number of permits, the first increase in decades. But the permits, due to be issued on July 1 of this year, have still not been issued more than 100 days after they were promised, as THE CITY reported, leaving vendors waiting.

“There has been zero action from our city, they are legally bound to do this and they are dropping the ball,” said Councilmember Chris Marte, one of a handful of council members who attended a protest in September and marched to City Hall. DOHMH said in a statement it is “making progress” on permits.

Dozens of vendors stood behind him holding signs in Spanish, Chinese and English that listed their demands, including: access to permits and licenses for all street vendors; the creation of a Small Business Sector for vendors; the expansion of legal vending locations; and the cessation of police enforcement. Next to the group, a few vendors knelt on the pavement to fill out a large white poster paper with the prompt “Street vending is important to me because…” One answer, written in Spanish, read: “I am elderly, vending is my only livelihood.”

The fight to obtain legal permitting is decades-long. In the 1980s, former New York City Mayor Ed Koch implemented a cap on vendor permits, limiting the number of legal mobile food vending permits to the current day tally of 5,100. Business and real estate interests—who saw the street vendor industry as a drag on property values—were a strong influence. Fifth Avenue executives, including real-estate mogul Donald Trump, called for stricter enforcement of vendors. One executive at Bergdorf Goodman complained that the Midtown stretch was starting to look like “Istanbul on a Sunday.” Koch ramped up police presence and began to conduct sidewalk sweeps, in the name of the “safe flow of pedestrian traffic,” continuing with anti-Middle Eastern sentiment, saying the avenue should not look like a “souk”  and that the vendors were ruining the “ambience” of Millionaire’s Row.

Even at the time, the cap vastly underestimated the total number of street vendors, which numbered around 9,000. Today, the number stands closer to 20,000. (Thousands aren’t able to even get on the permit waitlist, which has its own cap and closed in 2007.)

The 40-year restrictive cap has fueled an underground economy for permits. Current permit-holders “rent” permits to vendors for up to $25,000 per two-year permit cycle—an exploitative hundredfold price hike. The cost for obtaining a legal permit through the city is $200. If vendors do not have access to capital to rent off the black market, they have to vend without a permit, where they risk either punitive fines or potential arrest. As Mother Jones has reported before, those fines are sometimes issued for minor violations, such as selling food too close to a crosswalk.

“Her business is constantly at risk,” State Senator Jessica Ramos tweeted in a thread about Ramirez’s chalupa stand last August. “As our economy recovers, we must create opportunities for entrepreneurs like Cleo to formalize.”

While Ramos has introduced New York State legislation to lift the cap on all permits and expunge vendors’ records from vending citations and misdemeanors for cities with a population of 1 million or more, street vendors and advocates alike had hoped that New York City’s Local Law 18, which had already passed, could provide that opportunity.

Out of the 445 supervisory licenses released annually, 100 will be full-term citywide licenses, 300 will be outer borough licenses, and 45 will be for disabled veterans, disabled persons and non-disabled veterans. The creation of a supervisory license aims to undercut the underground market system that creates a landlord-renter dynamic, as it requires a license-holder to be physically present at the cart. The bill also created a new vendor law enforcement unit under the Department of Consumer and Worker Protection (DCWP) and a street vendor advisory board to oversee enforcement and propose future recommendations for the industry.

On June 30, the day before permits were to be released, the Department of Health and Mental Hygiene held a public hearing on the proposed law. Vendors voiced concerns about one clause, a single waitlist for all five boroughs, instead of one for Manhattan and another for the other four. They feared that the merged waitlist would force them to choose between keeping their current location and owning a legal permit, depending on where their legal permit is issued.

“It’s important for me to stay in my location because that’s where my community is, that’s where the majority of poblanos are,” Ramirez told Mother Jones via an interpreter at the gathering, “It’s a neighborhood where a lot of folks don’t have a lot of food sources so it’s important to give affordable options.”

Following the June 30 hearing, which spotlighted vendors’ concerns about a merged waitlist, Kaufman-Gutierrez says the DOHMH told the Street Vendor Project in a phone call that they would return to the former system—two waitlists for supervisory licenses, one for Manhattan and one for non-Manhattan applicants. (A DOHMH spokesperson said the department would create three new waiting lists to distribute supervisory licenses, without elaborating.) However, scheduling the public comment hearing only one day before the first 400-plus applications were released has caused a significant further delay. Not only has the DOHMH failed to issue any new licenses, street vendors have been facing an increased amount of enforcement, according to Carina Kaufman-Gutierrez, Deputy Director of the Street Vendor Project (SVP), a vendor advocacy group that’s part of the Urban Justice Center.

Street vendor enforcement efforts were shifted from the NYPD to the Department of Worker and Consumer Protection as of January 2021—a move to civilian oversight that advocates celebrated. But not only has the DCWP continued to work with the police, there has been an increase in fines and tickets in the first year of the new enforcement unit, according to data from City Limits.

At the September protest, attendees also went to the DCWP offices on Broadway. Ruth, a vendor from Oaxaca, Mexico stood in front of the crowd with a member of SVP, who translated for her. She said she began working as a vendor after her husband was diagnosed with a tumor, but she has struggled. She received a $1,000 ticket last July for working without a permit. She now fears working on Mondays and Thursdays, when city agents patrol the area.

“How are you ticketing for the thing you have the ability to give but aren’t?” asked Hannah Towfiek, an organizer with the Street Vendor Project.

The fine for unpermitted mobile food vending is $1,000, which can be a vendor’s paycheck for up to a month, Kaufman-Gutierrez told community reporter Andrea Pineda-Salgado in an episode of the Epicenter NYC podcast earlier this year. “It creates a cycle of debt,” she said. “What do you expect a street vendor who doesn’t have a permit to do? They’re going to go back out and work.”

Jackson Heights, where Ramirez makes salsas from scratch, has logged the highest number of inspections and fines in the first year of DCWP enforcement, even though it received less than one-fifth of total complaints, including those from the general public and business improvement districts (BIDS), according to City Limits analysis.

“My district has the most complaints,” said Councilmember Marte, who represents District 1 and attended the September protest. “Why are most of the investigations in the outer boroughs? We’re here to tell the NYPD to stop being racist.”

In response to a question about this data, a spokesperson for DCWP wrote, “DCWP conducts inspections in areas where vendors frequently operate and in response to complaints we receive. In response to repeated complaints and concerns from local elected officials and community leaders, we judiciously and appropriately scale up our enforcement response.”

Street vending is one of the only options for employment and to start a business for new immigrants, who make up the majority of the street vendor population, according to the Street Vendor Project’s Kaufman-Gutierrez.

“It theoretically should be something that has a low barrier to entry because it creates an opportunity for people to start their own businesses,” said Kaufman-Gutierrez. But instead, vendors are heavily criminalized without adequate ability to legalize their livelihood.

The first batch of new supervisory licenses will now be released in early 2023, according to a spokesperson for the DOHMH. Even with the thousands of additional permits to be released by 2032, the demand is still significantly higher.

One septuagenarian member of the Street Vendor Project recently got an application for a Green Cart permit after 15 years of waiting. But, as Towfiek notes: “Who has 10 years to wait?” The permit would allow her to sell fruits and vegetables in the South Bronx making a modest living for her family. But before she could become a legal vendor, her husband died.

“I get to see this day that has finally come where I got a permit,” she told Kaufman-Gutierrez. “And my husband wasn’t able to see it happen.”