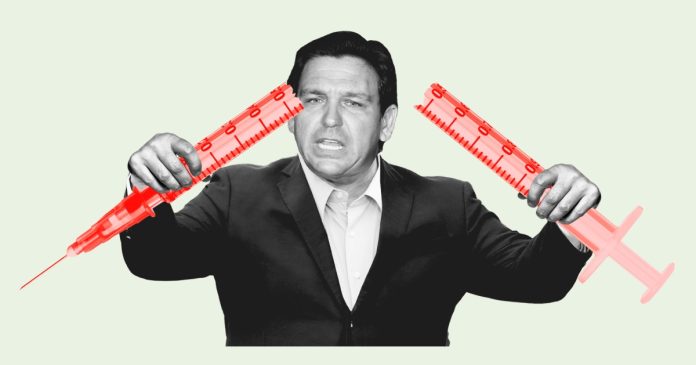 It wasn’t so long ago that Florida Governor Ron DeSantis was publicly singing the praises of Covid vaccines. “If you are vaccinated—fully vaccinated—the chance of you getting seriously ill or dying from Covid is effectively zero,” he said at a July 2021 press conference. “These vaccines are saving lives.”

Fast forward a year or so and, to put it mildly, DeSantis has pivoted. “They lied to us about the mRNA shots,” he thundered at a public appearance this past August. “They said, ‘If you take it, you will not get Covid.’” Then, earlier this month, Florida Surgeon General Joseph Ladapo released new guidance suggesting that young men shouldn’t get booster shots because, he claimed, new evidence suggested that the vaccines could dramatically increase their risk of dying of a heart attack or stroke.

Both Desantis’ and Ladapo’s claims are misleading: Public health officials did not “lie to us” about the Covid vaccines; rather, they were far more effective at preventing transmission of the original strain of the virus and continue to be extremely effective at preventing hospitalization and death. And, as the Washington Post reported, experts have pointed out a few problems with the logic underpinning Lapado’s new guidance: it drew from potentially inaccurate death certificates instead of medical records; it excludes anyone with Covid from the analysis; and it extrapolates from just 20 deaths that occurred—in some cases, as long as a month after vaccination.

Yet medical nuance might not be what DeSantis is after. Aubrey Jewett, a professor of political science at the University of Central Florida, suspects that there are strategic reasons behind the governor’s about-face on the Covid vaccines. In the last few weeks leading up to the November midterms, Jewett says, DeSantis is likely attempting to downplay the seriousness of Covid in order to justify his decision to reopen early in the pandemic. He’s also catering to his base, Republican voters who are increasingly skeptical of Covid vaccines. “DeSantis realizes that a big segment of the Republican base responded enthusiastically to his new approach, whether it be castigating Fauci or the ‘biomedical security state,’” says Jewett. “I think that has been a winning issue for him.”

Courting vaccine skeptics could yield DeSantis immediate gratification in the gubernatorial race between him and former governor (and former Republican) Charlie Crist. But he may be playing a long game, as well: With an eye toward a probable presidential run in 2024, DeSantis, who didn’t respond to a request for comment from Mother Jones, likely is trying to distinguish himself from Trump. In a presidency and post-presidency marred by scandals, chaos, and conflict, the rapid development of highly effective Covid vaccines was a rare bright spot—and one that Trump still takes credit for.

The friction between DeSantis and Trump around Covid vaccines appears to have started last January: Shortly after Trump was booed at a rally when he mentioned that he had received a booster, DeSantis declined to disclose whether he’d gotten one, saying he didn’t want his vaccination status to be “be a weapon for people to use.” A few days later, Trump lambasted politicians who refused to comment on their vaccination status, calling them “gutless.”

Yet long before that dustup, DeSantis had been flouting the federal government’s recommendations around Covid protections, distinguishing himself early on in the pandemic with an aggressive approach to reopening. He was one of the first governors to lift restrictions in 2020, and in 2021, he made the news when he announced plans to cut funding from schools that ignored his ban on mask mandates. It wasn’t always clear that this blasé attitude toward the virus would win DeSantis support: In summer 2021, as the Delta variant surged and the Covid death toll rose, he seemed to be losing popularity, with his approval dipping below 50 percent, according to a Quinnipiac poll at the time.

But by last winter, after the Omicron surge abated and highly effective Covid treatments became available, Floridians began to take a rosier view of his actions. An April 2022 poll by Florida State University indicated that 60 percent of Floridians were satisfied with the state’s handling of the pandemic. A poll by the same group earlier this month, after Hurricane Ian ravaged the Southwest part of the state, suggests his approval rating is now 52 percent—an 11-point lead over Crist.

As his approval ratings have improved, DeSantis seems to be doubling down on his efforts to buck the scientific mainstream with Covid policy. Increasingly, he has aligned himself with advisers whose views don’t reflect scientific consensus. Ladapo, whom he appointed last fall, has a history of questioning the safety of Covid vaccines and promoting the discredited hydroxychloroquine treatment. In March, he gave a press conference with two physicians who penned the Great Barrington Declaration, which advocates for “herd immunity” through mass infection.

In July, I watched DeSantis speak at the annual conference of Moms for Liberty, a rapidly-growing parents’ rights group founded by two former school-board members in Florida. DeSantis bragged about how his administration had pushed back on the federal recommendation that the youngest children be vaccinated against Covid because they believed that immunity acquired from having contracted the virus was superior to the shot. “You do an emergency use authorization for a six-month-old, and people look at that,” he said. “Parents say, ‘You know what, what’s going on here? Who can I trust because they’re not playing it straight.’” He said he had heard that families were moving to Florida because they were worried their states would require children to be vaccinated against Covid in order to attend school. “Most of these kids have already had Covid and had immunity through that,” he said. “So, it’s very important that we were not allowing government to come in and force that on people.”

Yet even as DeSantis crows about his Covid success, his state is reeling from the pandemic’s ravages. More than 82,000 Floridians have died of Covid—the third-highest death toll in the country, behind the more populous states of California and Texas. And while DeSantis is favored to be reelected as governor, the Republican presidential primary is anything but a sure bet. “It’s a little bit of a dance between [DeSantis] and Trump right now,” says Jewett. “Anything that can subtly distinguish him from Trump in a good way as perceived by potential Republican primary voters—that’s a good thing for him.”