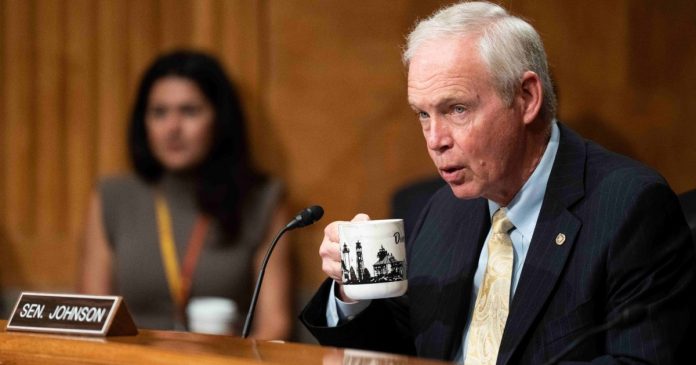 Sen. Ron Johnson of Wisconsin has paid a little more than $20,000 to a law firm tied to Donald Trump’s failed scheme to overturn the 2020 election.

NBC News, which first obtained Johnson’s financial disclosure forms, reports that Johnson’s campaign made two payments to the law firm of James Troupis, Trump’s attorney in Wisconsin, including one labeled “Recount: Legal Consulting.” The payments have raised concerns that the Wisconsin senator, currently in the midst of a historically tight race against Lt. Gov. Mandela Barnes, may already be preparing to challenge the election results with a possible recount. Johnson’s campaign dismissed NBC’s report, calling it a smear, but notably did not deny that it had retained Troupis’ law firm for counsel.

After losing Wisconsin in 2020, Donald Trump hired Troupis to oversee recounts in Dane and Milwaukee counties. The House Jan. 6 Committee investigation later found evidence that Troupis was at the center of a plot to install Republican electors in states where Trump was trying to overturn the election results.

This is far from Johnson’s first connection to Trump’s plot to overturn the election. As my colleague Eamon Whalen previously reported, on the morning of January 6, Johnson’s chief of staff reached out to a former aide for Mike Pence and offered to provide alternate electors that would vote for Trump, even though Joe Biden had won Wisconsin. Johnson has also come under fire for repeatedly claiming that the attack on the Capitol building was not an “armed insurrection” despite plenty of evidence that Trump supporters were indeed armed.

If Johnson is potentially preparing for a recount, weeks ahead of the election, it’d be very on brand, considering the rest of the Republican party’s acceptance of Donald Trump’s election lies.