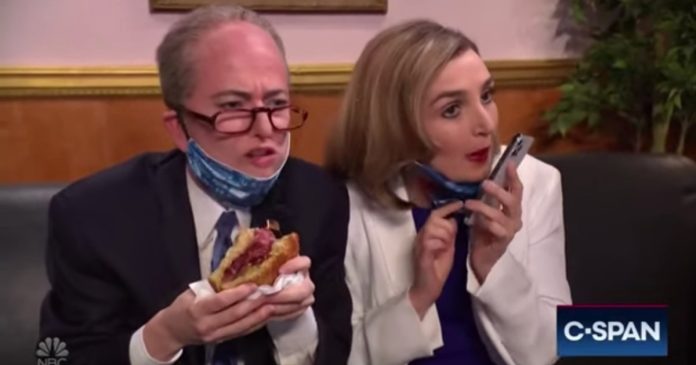 Our democracy may be crumbling. Millions of Americans still deny the results of the 2020 election. And a former president is unlikely to face any consequences for inciting an attack on the US Capitol. But, thanks to the writers at Saturday Night Live, at least we can have a laugh about it.

Saturday’s cold open depicts the ninth and final hearing of the January 6 committee, during which the members give their closing statements. “January 6 was one of the most dramatic and consequential moments in our nation’s history,” SNL castmember Kenan Thompson, playing Rep. Bennie Thompson (D-Miss.), the committee chair, says. “So to fight back, we assembled a team of monotone nerds to do a PowerPoint.”

Thompson recognizes Republican colleague Rep. Liz Cheney (Heidi Gardner) to speak. “Over the past few months, this bipartisan committee has presented our case to all Americans,” she says. “Whether you’re a Republican who’s not watching or a Democrat who’s nodding so hard your head is falling off, one person is responsible for this insurrection: Donald Trump. And one person will suffer the consequences: me,” a reference to Cheney’s election loss in her home state of Wyoming.

Rep. Adam Kinzinger (R-Ill.), played by Andrew Dismukes, then presents evidence that Trump knew he lost the election. “Everyone around him knew,” Kinzinger says. “He asked White House Counsel Pat Cipollone, ‘Did I lose the election?’ And Pat said, ‘Yes.’ He then asked Ivanka, ‘Did I really lose the election?’ She said, ‘Yes.’ He then tried a janitor: ‘Hey, you don’t think I lost, do you?’ The janitor responded, ‘I do.’ Then the president turned to a dog and said, ‘What about you, did I win?’ And the dog legit shook its head side to side, then barked a perfect, human, ‘No.’”

The skit wraps with Thompson thanking his colleagues for sacrificing their summers and “in some cases, their careers” to serve on the committee. “Well, we tried,” he adds. “It was a fun country while it lasted.”

Cynicism aside, the skit is great. Watch it in full here: