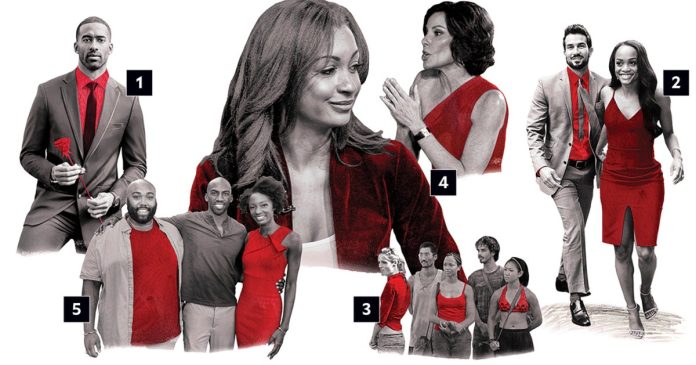 A decade after it aired in 2002, two former contestants took the show to court, alleging that the franchise engaged in discriminatory practices by denying minority applicants the equal opportunity to be contracted as the Bachelor or Bachelorette. The suit was ultimately dismissed, but in 2020, after years of complaints from viewers and 24 straight seasons without a Black bachelor, the show promised to address “the lack of representation of people of color.” Matt James was appointed the first Black bachelor, but his season became mired in controversy when host Chris Harrison defended a white contestant (who would go on to win the season) for having attended an antebellum-themed party a few years before. Ultimately, Harrison was replaced by two women, including one woman of color, but for the past three seasons the host has been Jesse Palmer—another white man.

In 2017, 14 years after the show premiered, Rachel Lindsay was cast as the first Black Bachelorette. But after four years with the franchise, in which she was portrayed as what she calls the “angry Black female,” reckoned with a racist contestant, and interviewed the host as he defended a white contestant’s racial insensitivity, Lindsay said she was done with the Bachelor franchise and some of its toxic fans, a group Lindsay labels the “Bachelor Klan” who she says are “afraid of change” and “afraid when they get called out.”

Back in 2006, the show attempted to fix its lack of diversity by framing its next season as a war of the races. By episode 3, the four racially segregated teams had become two integrated tribes—that is, until two white cast members split off to join their white allies on the other tribe. In the fall of 2020, months after a group of Black former contestants sent a letter to CBS about the need to address systemic racism, Season 41 became the first to recast in accordance with new diversity goals requiring 50 percent of contestants to be BIPOC.

In its 13th season, the show added its first Black cast member, Eboni K. Williams, in 2021. It didn’t go well. Williams was yelled at by fellow castmate Luann de Lesseps, who called her an “angry woman.” Williams attempted to explain how that phrase has been used in relation to Black women, but Lesseps continued calling her “angry.” The show did not respond publicly on their Instagram, but praised Williams in a post shortly after writing she was not “only smashing her freshman season, she’s annihilating it.” The next year, the show’s executive producer announced it was being recast with the aim of featuring women “who are of diverse backgrounds.” Some original cast members would get their own spinoff series.

The 2021 season was more racially diverse than ever before, but in the show’s 20-year history there had still never been a Black winner. Black contestants that season formed a secret alliance with the goal of breaking that streak. They called themselves The Cookout, and their plan worked: The Cookout evicted everyone else in the house, guaranteeing the winner would, for the first time ever, be Black. Some pockets of the Big Brother fandom were upset because, toward the end of the season, The Cookout was evicting people they otherwise liked… simply because of the color of their skin. White contestants, of course, have done the same thing quietly since the dawn of reality TV. The Cookout just said the quiet part out loud.