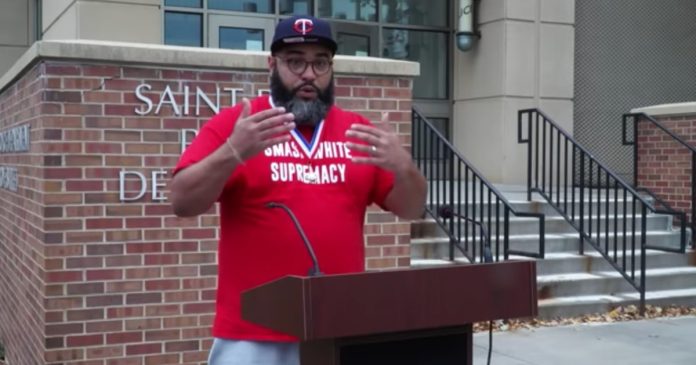 The St. Paul Police Department held an award ceremony this week to honor Alex Mingus, a Minnesota resident who performed “an act of gallantry and valor” in response to a shooting. But upon accepting the award, Mingus called out the lack of police action on the scene.

On October 8, 2021, Mingus was on his way to work when he heard gunshots at a gas station, St. Paul Interim Police Chief Jeremy Ellison said during the ceremony, originally recorded by On Site Public Media. A van sped away from the scene, and Mingus followed it. The van then pulled over, and a man got out, asking for help, Ellison said. “He was bleeding profusely.” Mingus, who said he is a certified firearms instructor, wrapped the man’s wound in a shirt to try and stop the bleeding. “Doctors stated that the aid provided by Alex prevented this man from dying,” Ellison noted.

After accepting a medal, Mingus took the podium and removed his sweatshirt to reveal a shirt with the words, “SMASH WHITE SUPREMACY.” Then, he turned to address the police directly: On the day of the incident, he said, nine police squad cars “raced” past the area where Mingus was assisting the gunshot victim. “That was a potential of 18 people—18 people could have stopped to help preserve life,” he said.

While Mingus said he appreciated the recognition, he felt “very uncomfortable” being there. “I do not rock with the police,” he said.

“I just want folks to know,” he said, looking into the camera, “They don’t keep us safe. We keep us safe.” After a pause, he added, “Riots work.”