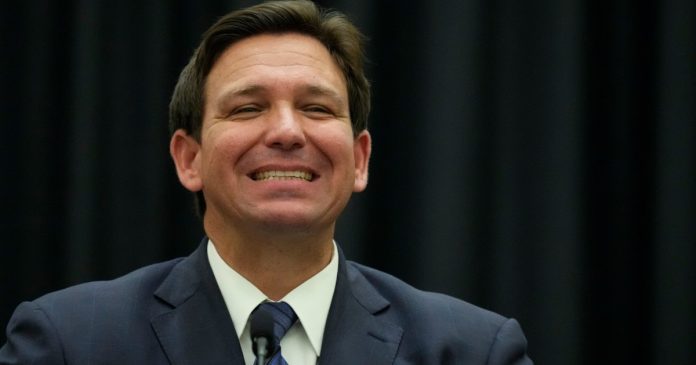 Florida Gov. Ron DeSantis had a problem. For weeks the Republican governors of Texas and Arizona have been bussing and flying asylum-seekers to Democratic-run cities in other states, and earning plaudits in right-wing circles for their trolling. DeSantis, who is almost certain to run for president in 2024, has endeared himself to conservative voters by aping not just Donald Trump’s mannerisms but also his stagecraft. Since being elected in 2018, he has rarely missed a chance to perform a political stunt with cameras rolling; last year, he turned a bill-signing for a law rolling back voting rights into a television special. But Florida, which is not on the Mexican border, was only receiving migrants in “onesies twosies,” he told reporters recently. Before DeSantis could ship asylum-seekers across the country, he first had to acquire some.

So that’s exactly what DeSantis did. Last Wednesday, he sent two planes to Texas, filled them with 48 Venezuelans, and shipped them off to Martha’s Vineyard. In interviews with the New York Times, and in subsequent court filings, Venezuelans described being lured on board with assurances that there people waiting for them at their destination, and that they would have access to housing and jobs. They were handed bogus brochures, and falsely informed that were going to Boston. When the migrants subsequently were transported to Boston, conservative politicians and their allies in right-wing media mocked the hypocritical “deportation” of “illegals.” Asylum seekers aren’t here illegally, and going to the mainland isn’t deportation. But those false characterizations pretty neatly embody how choreographed and depraved this exercise was. Authorities on the island weren’t tipped off about the new arrivals, but according to a state senator, there was a videographer, who passed B-roll on to Fox News; in the GOP’s golden-age of shitposting, mistreating migrants isn’t a faux pas, but forgetting to capture it on camera would have been.

In his eagerness to one-up Greg Abbott and own the libs, DeSantis raised the bar (or lowered it) for conservative governance in the Biden era. But his stunt was simply the newest twist on a campaign-season staple. For years, Republicans have sought to build political momentum, particularly in election years, by inflaming or manufacturing crises on immigration and border security. In turn, the politicians flogging those narratives have gone to increasingly expensive and elaborate lengths to stand out. A throwaway suggestion one year becomes an actual budget item the next—Trump once talked about sending migrants to liberal enclaves; DeSantis actually got his legislature to pay for it. It’s a marriage of the politics of performance and the politics of fear with no sign of abating.

Using migrants as a campaign cudgel is an old tactic, but the feedback loop of crises and showmanship we’re stuck in now really started accelerating in 2014. That spring, unaccompanied minors from Central America began crossing the southern border in record numbers. The surge of migrants presented real problems for ill-equipped authorities and for the kids themselves, but opportunities for conservative politicians. Texas Gov. Rick Perry, who still harbored presidential aspirations, demanded Obama reinforce the border, then decided to do it himself, ordering 1,000 National Guardsmen to the Rio Grande at a cost of $12 million a month. He also turned the crisis into a TV event, inviting Sean Hannity to join him on a helicopter flight and a cruise up the river, where they donned flak jackets and looked tough for the cameras.

That fall, the child migrants gave way to a new crisis: Ebola. Candidates tried to spin an outbreak in West Africa into an existential crisis for the country, arguing that porous borders would lead to infected migrants streaming into American communities. For politicians who often equated newcomers with disease, it was a moment of unusual synergy. To show that he was a man of action, New Jersey Gov. Chris Christie forced a Doctors Without Borders nurse to spend four days in a quarantine tent with a portable toilet, while he falsely asserted that she’d shown Ebola symptoms. But no one earned more free publicity from the freakout than Donald Trump. A regular on Fox News at the time, he demanded that all flights from West Africa be suspended and tweeted about the virus more than 50 times in just a few months, with a message that could fit on any chyron: “KEEP THEM OUT.”

It would be hard to describe what the Ebola political frenzy was like, with its foaming confluence of misinformation and nativism and extremely contrived alarmism, if it weren’t so similar to so many panics that followed in subsequent years. What Republicans learned from Ebola wasn’t that sobriety trumped sensationalism—it certainly wasn’t that they should study up on the nuances of infectious disease. It was that this is a show people would watch.

As the Republican presidential primary picked up steam in the fall of 2015, the new crisis was Syrian refugees. After a series of ISIS terrorist attacks, 30 Republican governors—plus Democrat Maggie Hassan of New Hampshire—declared their opposition to resettling Syrian refugees in their states, alleging, without any real basis, that the government was not properly vetting them. Louisiana Gov. Bobby Jindal, who was vying for the GOP nomination, authorized state troopers to monitor the 14 Syrian refugees currently in the state. The fact that he didn’t actually have the power to bar Syrians from Louisiana was immaterial—if this was the channel voters were watching, Jindal needed to make himself part of the programming. Trump, naturally, one-upped everyone. He called for “a total and complete shutdown of Muslims entering the United States until our country’s representatives can figure out what is going on.” It was Ebola all over again—but on a far larger scale.

In 2018, Trump conjured another, familiar crisis almost from nothing: “The Caravan.” In the final weeks before the Midterm election, Trump sent 5,200 troops to the US–Mexican border in response to the alleged threat posed by a large group of migrants traveling through Mexico to seek asylum at the border.

The Caravan was Trump’s desperate stunt to turn his party’s fortunes around—a limited-run showing that would terrify voters. Fox News claimed there were 100 members of ISIS in The Caravan. Trump warned of “Criminals and unknown Middle Easterners.” The national guardsmen the president had already sent to the border had so little to do that some of them were literally shoveling shit. But The Caravan dominated Republican messaging in swing states, and even some Democrats found it easier to embrace the stunt than to push back. A gunman riled up by Trump’s conspiracy theories about The Caravan massacred 11 people at a Pittsburgh synagogue. And then, one week after the election, the troops went home. Show’s over.

With a Democrat back in the White House last year, Republican governors began jostling for the spotlight Trump once hogged. Last March, Abbott expanded on Perry’s—and Trump’s—earlier efforts by launching “Operation Lone Star,” which sent thousands of Texas National Guardsmen to the border. He started building his own wall, too, at an estimated cost of $250 million.

Chris Christie once complained that visiting the border served no real purpose. “If I went down there and looked at it, what steps am I supposed to take exactly—send the New Jersey National Guard there?” he said in 2014. Now, that’s exactly what governors from non-border states do. South Dakota Gov. Kristi Noem, a possible presidential candidate, took $1 million from a Tennessee vehicle-salvage billionaire to send her state’s national guard to the border, then dined with the troops at Whataburger like a head of state visiting a war zone. Nebraska Gov. Pete Ricketts sent 25 state policemen to help out. Ron DeSantis sent 50 law enforcement officers—including some from the state’s fish and wildlife service.

The so-called “Biden Border Crisis” was contrived—when Republicans were first declaring that the country was being invaded, the numbers were actually pretty normal. But it was terrific content. The border was like one of those Instagram-famous national parks—behind every tough-looking snapshot from the Rio Grande was a long line of politicians just off-camera, waiting for the chance to strike their pose. Lauren Boebert brought a Kamala Harris cutout to the border. Ken Paxton brought Maria Bartiromo. Ted Cruz, who actually introduced legislation last year that would have forced the federal government to send migrants to Martha’s Vineyard—good artists borrow, great artists steal—filmed himself standing along the Rio Grande at night looking like he was behind enemy lines in Donbas:

Live footage from the banks of the Rio Grande.#BidenBorderCrisis pic.twitter.com/aO4EyANrRQ

With another midterm election looming, Republican governors have responded to large numbers of asylum seekers crossing the Mexican border from Cuba, Nicaragua, and Venezuela with a new kind of peacocking. By rounding up migrants themselves and removing them from their states (or other people’s states) the candidates of 2022 are actually doing the kinds of things that candidates of 2018 merely fantasized about doing in their ads.

A lot of the asylum seekers who have taken Republican governors’ bus rides and plane trips to Blue States do, in fact, want to go to the places they’ve been told they’re going. It’s not hard to understand why. But the fact that there are upsides does not make the gesture benevolent. There is an inherent malice in reducing desperate people to props in a future campaign ad, to gleefully dispatching them to places you pretend to hate as if they are some sort of grenade. It is dehumanizing to deposit migrants outside the vice president’s house to be paraded in front of an assemblage of TV crews, even if there might be resources available once they exit the stage.

On Tuesday, a plane belonging to the same charter company DeSantis had hired for the Martha’s Vineyard trip flew to Texas again, then began making its way along the eastern seaboard. Desantis declined to shoot down speculation that the plane was headed to Delaware, where he had previously threatened to deposit migrants. In Biden’s home state, local authorities and aid organizations readied themselves for the anticipated arrival. The plane never arrived; it landed, instead, in New Jersey, without a single migrant inside.

But it wasn’t supposed to be empty. An investigation by the Miami Herald described how asylum seekers had been lured to a hotel miles away from the Migrant Resource Center they’d been staying at in San Antonio, apparently by at least one of the same people who had coaxed the Martha’s Vineyard migrants onto their planes. They were sworn to secrecy, promised passage to an unspecified location in the Northeast, and then told that they would be flying to Delaware. And then…nothing. Eventually, some were bused back to the center. Others were just abandoned at La Quinta.

DeSantis’ decision to rope dozens of people seeking asylum into a sadistic bait-and-switch was the logical step for a man who has molded himself in Trump’s image. The state had paid nearly $1 million to a company that flew an airplane halfway across the country. A sheriff in Texas had launched a criminal investigation into the Vineyard flight, and three Venezuelans had filed a class action lawsuit over their treatment. But the day-long speculation about a Delaware flight had been a brilliant operation, a DeSantis ally boasted to NBC News. The media had been “punked.”