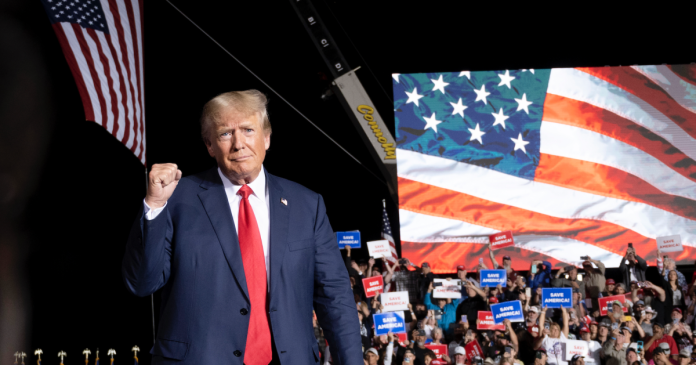 In a rambling letter responding to the January 6 committee, Donald Trump waxed nonsense about a witch hunt, Black Lives Matter, and television ratings—littering the entire document with his trademark chaotic capitalizations and election lies. But despite dedicating 14 pages to the matter, the former president declined to answer the only question of consequence: whether he’ll comply with the committee’s subpoena and finally testify.

That, of course, was likely the point. After all, if you wanted to convey useful information, you probably wouldn’t kick off a letter to Congress with, “THE PRESIDENTIAL ELECTION OF 2020 WAS RIGGED AND STOLEN!” While much of the document recycles his false electoral conspiracy theories—you can take a full tour of the letter here if you have the patience for that kind of stuff—I feel the need to call out the appendix:

What you see above transcends an ordinary, sloppily done Microsoft Word, import-images job. It’s also a snapshot into the mind of a former president nearly two years after his historically disgraceful departure from the White House. Does he seem overly concerned with his ever-mounting legal woes? No, and we have plenty of other publicly available evidence to support that inkling, such as Trump having the gall to start something called “Trump Organization II” while being sued for financial fraud. Instead, Trump continues to obsess over seemingly pointless details, in this case, crowd size. He logs paragraphs worth of complaints in a letter to lawmakers about how the media failed to give him credit for attracting a large audience to the rally that proceeded the attack on the US Capitol. Here’s a glimpse:

The massive size of this crowd, and its meaning, has never been a subject of your Committee, nor has it been discussed by the Fake News Media that absolutely refuses to acknowledge, in any way, shape or form, the magnitude of what was taking place. In fact, for such a historic event, there are very few pictures that accurately show the event, or how many people were really there. Incredibly, it seems that pictures showing the size of the event were perhaps cancelled, scrubbed, deleted or, in any event, not available, but we still have some—as attached.

So, there we have it. Not long before an all-but-certain announcement heralding his future attempt to storm his way back into the White House, Donald Trump is here to remind you that in addition to being a menace to democracy, an unabashed bigot, and general terror—he’s also just a small-minded boy, writing hate mail to the January 6 committee, whining about crowd sizes.