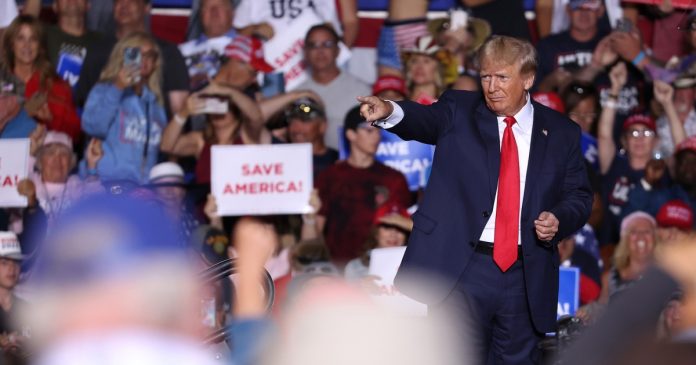 At a rally for Nevada Republican candidates on Saturday, Republican nominee for secretary of state Jim Marchant promised that he and his fellow GOP nominees, if elected next month, would reinstall Donald Trump in the White House in 2024.

“We’re gonna fix the whole country and President Trump is gonna be president again,” Marchant promised as Trump stood beside him.

Marchant told rally-goers that he had started a coalition of nominees for secretary of state around the country that believe the 2020 election was stolen and plan to return Trump to the White House in two years. “I established a MAGA America First coalition of secretaries of state candidates around the country,” he told the crowd in Nevada. They will win, he predicted. And if they all win “we take our country back.”

Marchant: President Trump and I lost an election in 2020 because of a rigged election. When my coalition of secretary of state candidates get elected, we’re gonna fix the whole country and president trump is going to be president again pic.twitter.com/vqTGLVk2e5

Marchant: If get all our Secretaries of State elected around the country like this, we take our country back pic.twitter.com/w7hFyD4Kkq

A former Nevada state assembly member, Marchant ran for Congress in 2020. He lost. Then, he unsuccessfully sued claiming that, like Trump, he was the victim of election fraud.

Still, Marchant has consistently polled ahead of his Democratic opponent in his upcoming secretary of state race. If he wins, Marchant would be the chief election official in a swing state that could determine the outcome of the 2024 election.

Marchant and his coalition of allies hope to roll back access to mail-in voting, get rid of vote tabulation machines, and throw out the state’s voter registration roll thus forcing all Nevada voters to re-register. That’s a dramatic and legally dubious version of something that Republican secretaries of state have done in the past to make it harder for Democrats to win: aggressively purging the voter rolls.

Democrats, worried about a Marchant victory, are rushing to boost the Democratic nominee, according to an NBC News report, but fear it won’t be enough to defeat Marchant.