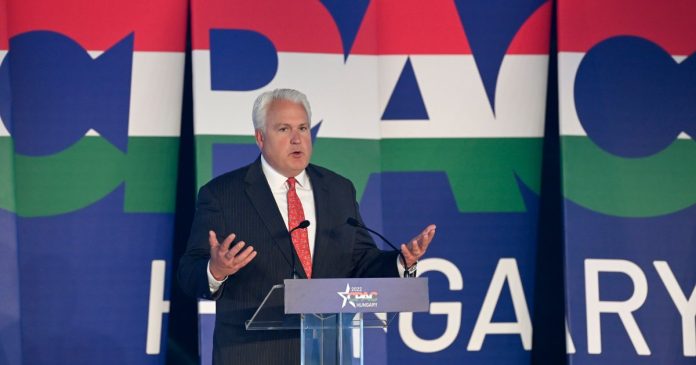 The chairman of the Conservative Political Action Coalition (CPAC), Matt Schlapp, delivers the welcome speech at the CPAC conference in Budapest, Hungary, this May.Szilard Koszticsak/AP

It’s mostly surprising that it took this long. CPAC has deleted a tweet that called on Democrats to “end the gift-giving to Ukraine.” The tweet featured a Russian flag and referred to “Ukraine-occupied territories.” Most Americans, not to mention much of the rest of the world, call these regions, which Vladimir Putin illegally annexed, Ukraine.

The tweet came after Putin signed “accession treaties” with four Ukrainian regions on Friday to try to make them part of Russia. One day later, Russian soldiers found themselves retreating from Lyman, a strategically important city Putin claims to have annexed. To try to win the war, Putin is now conscripting soldiers—many of whom have either resisted the draft or fled the country.

CPAC head Matt Schlapp told the Washington Post that the original message did not go through the normal approval process because he was in Australia. “Due to my travel into a distant time zone it was never approved per usual,” he texted.

But the far right has had a complicated relationship with Russia’s aggression. Tucker Carlson from Fox News has repeatedly downplayed Putin’s actions. So much so that, as my colleague, David Corn reported, “[A]s Russian military forces bombed Ukrainian cities as part of Vladimir Putin’s illegal invasion of his neighbor, the Kremlin sent out talking points to state-friendly media outlets with a request: Use more Tucker Carlson.”

The conservative organization tried to clean up the mess on Twitter with apparent outrage at the Russian incursion. It said “Russia’s illegal invasion of Ukraine must be repelled” and called Putin a “madman.” But the group maintained that “American taxpayers should not be shouldering the vast majority of the cost.”

Schlapp and other CPAC members were out of the country to host CPAC Australia this weekend. The event offered right-wing Aussies the chance to hear from luminaries including Matt Whitaker, the former acting Attorney General who once worked for a company that hawked a toilet specially designed for “well-endowed men,” the cringe British rapper Zuby, the Brexiteer Nigel Farage, and compatriots including a libertarian filmmaker who goes by Topher.

It wasn’t the CPAC A-list. That would have included Viktor Orbán, the Hungarian autocrat and Putin sympathizer who spoke at CPAC Texas this summer. When it comes to selling out Ukraine, CPAC still prefers an intermediary.