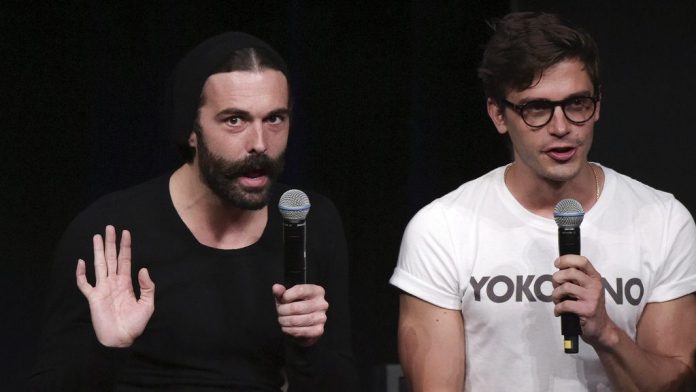 Fans and non-fans alike were angered by the recent advertisement for pet food that Queer Eye’s Jonathan Van Ness and Antoni Porowski posted on their social media accounts on Thursday. Or more accurately, people were upset that the pair had pretended to be in a relationship in order to announce the launch of their new dog food brand.

The reaction was intense, with one tweet even accusing them of queerbaiting, which is impossible for openly queer people to do: The definition of queerbaiting includes that the person doing it has no intention of “ever actually depicting such relationships or sexual interactions.” Ness and Porowski have long been upfront about being in the queer community and both are in relationships with men.

Perhaps the issue with Ness and Porowski’s posts is the queer community’s gag reflex when it comes to anything too corporate. But two things are true: People are becoming brands and queerness is becoming more normalized. It makes sense that queer people are going to use their queerness as part of brand deals and endorsements. Many are already doing so, as seen in last Pride Month’s Ugg collaboration with the Trevor Project. So, yeah, some queers are going to be capitalists.

Straight celebrities do brand deals all the time and often use their relationships and personal lives as part of the ad. They get criticized if they partner with a problematic brand, but otherwise it seems to be accepted as a fact of life; a reality so present that many of us have come to expect that contestants on popular reality dating TV shows might just be there to make money from future ads posted on their newly booming Instagrams. Former Bachelorette lead JoJo Fletcher and her husband, for example, had a discount code with The Knot, a wedding website, as part of the lead-up to their wedding.

Sure, I don’t love brand deals. But doing them is not evidence of some moral failing. JVN wants to be a capitalist, that’s clear from their multiple commercial ventures and brand partnerships. Does that make me love them more? No. Does it make me want to attack their queerness on social media? Also no. Queer people are expansive in their wants and desires and an ad is typically not reason enough to feed into the anger of the social media machine.