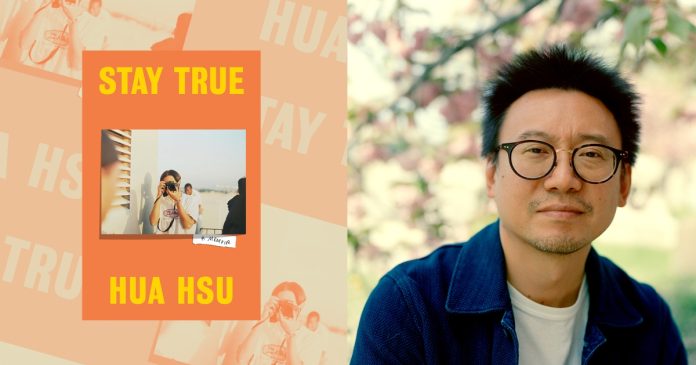 In the disquieting fog of grief, no one expects to be industrious. But after the violent murder of a beloved friend, Hua Hsu instantly started taking notes. To what end, Hsu didn’t know at the time; he was in college and knew vaguely that he wanted to be a writer. “I had all these pages of riffs and memories and descriptions,” Hsu recalls in a recent Zoom call, “most of which I just didn’t think were good enough to ever be published as something because they were just so intimate and raw and specific.”

After several meandering years, during which Hsu climbed out of adolescence, quit meat only to become infatuated with a specific burger, and became a staff writer for the New Yorker, a vision slowly took shape. Now, Hsu’s countless memos, woven together by memory and a searing tenderness, have produced his much-anticipated new memoir, Stay True. The book is a coming-of-age story, perhaps unlike any other I’ve come across from an Asian American writer. It’s centered around memories of his friend, Ken, and the grief after he was killed in a random carjacking. But it isn’t weighed down by this heartbreak. Instead, like the friendship it mourns, the book is undeniably fun, a testament to the feverish joy only young people can find in shooting the shit. While it hits at several themes—the Asian American experience, trauma, and the funny mechanics of memory—Stay True is perfumed with a distinct promise throughout, the glow that comes with knowing that you’ve met your tribe.

“I was an American child, and I was bored, and I was searching for my people,” Hsu writes at the end of an early chapter. I found that line—which neatly captured a teenage life condemned to the burbs and the luxury of wasted time—frequently bouncing around in my head. It reminded me, with distinct clarity, of my own evenings as a teenager, evenings spent in a hideous purple Volkswagen trying absurdly to mimic that Nick Drake-backed TV commercial. Hsu’s writing brought recollections of the mindless thrills discovered in AOL chatrooms, the joy of an inbox newly filled, dumb rides to 7-Eleven just for the hell of it, picking out vintage t-shirts in hopes someone special notices.  It’s in such detailed but elegant remembrance of inanity that Hsu, now with at least two decades of growing up behind him, is also able to gently skewer his former identity as a self-professed teen snob—quick to label you a poser; he got the mixtape first.

These days, Hsu isn’t too concerned with the notion of coolness—that’s a young man’s game. In fact, over Zoom, Hsu appeared almost disarmingly at ease. Freed from the adolescent torture of trying so hard, and, perhaps even, having gained some ability to process the anguish of losing a close friend, Hsu, 45 and a professor at Bard, seemed like any other Brooklyn dad: relaxed, and as ready to talk about an obscure album as he is the glorious offerings inside the Park Slope Food Co-Op.

What has the reception of the book been among friends who also knew Ken?

It wasn’t clear to them or to me that it would be a book because circa 2000 to 2005 there wasn’t really an appetite for these kinds of books from Asian Americans. Also, at the time, I didn’t really have any sense of what the book would be about other than just canon—how much I admired him.

I sort of refrained from talking too much about it as I was working on it because so much of it is about memory and how memory can haunt you, how memory can kind of close you off in a way, too. I didn’t want to report it from the perspective of my friends.

Yeah, I was amazed at the tiny details.

It’s probably a gift and a curse that I remember everything. I don’t know, they seem to feel transported back to that time reading the book—and that’s probably the best compliment I can get.

It’s incredible because, for me, the experience was very bittersweet. Like it was very sad to think about these moments, but there were also moments as I was writing where I felt like I was just hanging out with us, hanging out with Ken. So for them to be able to reflect on this moment in their lives—and to find both the joy and also be reminded of the pain—it’s more than I could have hoped for. They’re the people whose opinions matter in a totally different way than anyone else’s opinion.

I think I’ve been able to have a lot of conversations with my friends that we’d never had, or we hadn’t had for 20 years. So it’s been a real treasure just to be able to talk to friends and really hash out how that moment affected us.

One of the most gutting moments for me was when a mutual friend randomly, kind of offhand, questioned your closeness to Ken. Can you talk about how memory shapes identity?

I think over time my identity became over-determined by my sense of memory; I was pretty much just stuck in the past. I was clearly still a functioning person, I was a very productive person. But there’s definitely a part of me that was just really stuck in the past. In a way, I think I nurtured that and I think I actually found solace in that. But over time, the more you think about it, the more distance accrues.

Did writing Stay True help you get unstuck?

This is a bit random. But while I was reading the book, I found myself sort of hanging out with you, hanging out in a gross dive bar, arguing dumb things like top ten lists. So I wanted to know: what are Hsu’s top 5 spots in New York?

The first is Weekend Records. It was a record store that my friend ran out of his living room in Williamsburg. He had basically cordoned off the front of his loft into a little record store. I learned so much about music from him and about the passion required in discovery because he was just constantly looking for new records, looking for new sounds.

The second one is the Corner Bistro. I hadn’t eaten meat for many years and a couple of my friends brought me there. I was in grad school in Boston at the time, so I really wanted to eat things that I had never had before. So one day, we met up and go to the Corner Bistro but they only have burgers here. My friends John and Joey were like, ‘No, no, these are really good burgers.” And I said, ‘I don’t eat meat.’ And they’re like, well, ‘You should reconsider that right now.”

It was the best cheeseburger I’d ever had. I’m actually thinking about it now and getting emotional. We would just go there all the time. I think one time I ate there three times in one day. Eventually, Joey and I struck up a friendship with one of the bartenders and bouncers, an Asian guy, Franklin. He would look out for us and bring us in through the back door. That was probably one of the best feelings in my life, having this in with one of the people at the Corner Bistro.

The third is APT, which was this little club in the meatpacking district. My friends had a regular night there—maybe weekly or monthly—and they played the best music.

The next one is WXOU, a bar on Hudson. It’s a great bar that was close enough to the Corner Bistro that we’d end up at.

Okay, so the last one is very pathetic. But it’s a reflection of kind of where I am in life right now. It’d have to be the Park Slope Food Coop.

Yeah. I’ve been a member for almost nine years and it’s sort of like a cult. I think it’s a reflection of being 45 that I go there more than I go to most other places because I’m just constantly buying food. I’ve met a lot of really interesting people there. Even though it’s sort of a ridiculous place, I enjoy its ridiculousness; I embrace it.

So you kind of own up to this in the book about being a general snob. But in my experience, there’s nothing like the birth of a child to bring about ego death and kill that. How does your kid feel about the things that you think are cool? And do you try and impress certain things upon them? Bands?

I think that as I’ve gotten older, it’s not that I no longer care about these questions, it’s just that I no longer have any grasp of what a young person thinks is cool. Maybe ten years ago, I was still really curious. But at this point in my life, I can just accept that the currencies of cool circulate among the young and I’m not young, and so it doesn’t really affect me anymore. I no longer have to try and figure out how I think about that. I have no grasp of why 18 or 19-year-olds like the things they like, and that’s definitely extended to my own child.

What was it like going back to that vantage point of a kid experiencing college to write this book? To write like a person you’ve moved on from? Do you like who you were in these pages?

I’m fond of the characters in the book, and I think I’m the only true caricature. There are a lot of aspects of my teenage self that I now find ridiculous but I’m the only one allowed to point out how ridiculous I was, you know what I mean? It’s cliché but I definitely regarded my younger self and thought: you should really just appreciate what’s in front of you. But it’s impossible to do that. I think young people are contractually obliged to always want more and always think that there’s more meant for them. It’s a hard-learned lesson to appreciate what you have.

It sounds so conceited to say but I’m fond of my younger self. I recognize so much of why I was the way I was, and why I still am that person to some extent. But, I think for me, the difficult part was figuring out how to link those narratives.

I have two more random questions. What’s a song or album you can’t quit right now? And how do you discover and fall in love with new music?

Let me see. I’m very bad at these questions, actually. When I was a music writer, people would always ask me for recommendations and I would say ‘I don’t actually know.’ But I have answers to both these questions. For album, it’s one by Can called “Future Days.”

I find out about new music a lot from students or former students. I’ll always ask kids during office hours what they’re listening to because I’m just curious. Having access to this cohort of 20-somethings every year is a good way to kind of hear what’s out there.

This interview has been edited for length and clarity.