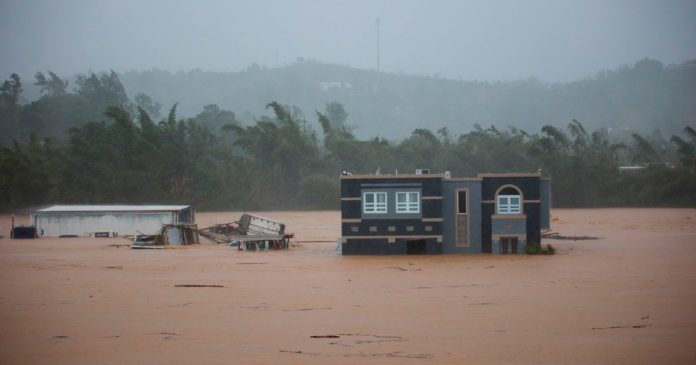 Three people inside a house await rescue from the floods caused by Hurricane Fiona in Cayey, Puerto Rico. Stephanie Rojas/AP

The entire island of Puerto Rico lost electricity on Sunday as Hurricane Fiona made landfall, battering the US territory with heavy rains and wind gusts over 100 mph.

President Biden on Sunday approved an emergency declaration for Puerto Rico, allowing the federal government to give more assistance for disaster relief on the island. The National Hurricane Center said the storm would produce “life-threatening flash flooding and urban flooding across Puerto Rico and the eastern Dominican Republic, along with mudslides and landslides in areas of higher terrain.” In Puerto Rico’s central and eastern regions, according to the Washington Post, some rivers and streams have already flooded into residential areas.

President Biden has approved an emergency declaration request for the Commonwealth of Puerto Rico, directing his team to surge Federal assistance to the region.

We are committed to supporting the people of Puerto Rico impacted by Tropical Storm Fiona.

After Hurricane Maria in 2017, the US government was criticized for a slow and insufficient response. For weeks, people on the island lived without electricity and endured long lines to get food, water, and toiletries, all of which had been rationed. The vast majority of Puerto Rico’s electrical transmission and distribution system was destroyed by that storm, and efforts to repair the damage has dragged on even as residents pressured local politicians and the US government to improve recovery efforts. Last year, FEMA announced it was awarding $9.4 billion to the state-run Puerto Rico Electric Power Authority, which generates electricity, and this year the federal agency said it was allocating another $107 million to make the island’s power infrastructure more dependable.

As Puerto Rico‘s governor was briefing the island ahead of Fiona‘s impact the lights went out. The governor has already said LUMA Energy – the private company in charge of transmission & distribution of electricity on the island – is on probation with him. pic.twitter.com/YVEnPPcnZp

On Sunday, Luma, the private consortium that now has a contract to oversee Puerto Rico’s power transmission and distribution, requested “patience” as its officials worked to restore electricity to the island, something that they estimated could take several days. But even before the power outage began, Abner Gomez, the consortium’s head of public safety and crisis management, tried to assure nervous residents that Fiona would not be as bad as past storms: “This is not Maria,” he said, according to CNN. “This hurricane will not be Maria.”