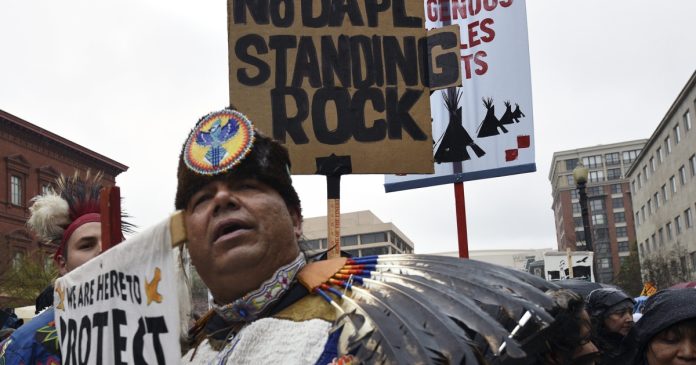 Republican-led legislatures have passed anti-protest laws drafted by an extreme right corporate lobbying group in a third of all American states since 2018, as part of a backlash against Indigenous communities and environmentalists opposing fossil fuel projects, new research has found.

ALEC, which is funded by rightwing state lawmakers, corporate sponsors and trade groups, and wealthy ideologues, creates model legislation on a whole range of conservative issues such as gun control, abortion, education funding and environmental regulations.

The laws were passed in 17 Republican-controlled states, including Oklahoma, North and South Dakota, Kansas, West Virginia and Indiana, where protesters now face up to 10 years in prison and million-dollar fines, according to a new report from the nonprofit Climate Cabinet.

The anti-protest bills, which were rolled out in response to the success of mostly Indigenous-led campaigns slowing down fossil-fuel infrastructure projects, have used intentionally vague language to create a chilling effect on free speech and assembly—both constitutionally protected rights, according to the report “Critical Infrastructure Laws: A Threat to Protest & the Planet.”

“Indigenous-led demonstrations opposing fossil-fuel projects have been one of the most successful and effective forms of climate action to date…in an affront to the protected freedoms of our Constitution, state legislatures have found a new legislative mechanism to oppress frontline communities and cause further harm and destruction to our planet,” said Jonathon Borja, co-author of the report.

Other states followed after ALEC created a model bill for lawmakers to copy at scale. So far, the bills have not passed in any states where Democrats hold a majority in at least one legislative chamber, though some Democrats have voted in favor of them.

In most of the bills, protestors, like those who participated in the DAPL demonstrations, could now face felony charges, while those charged with “aiding” protests could face harsh fines.

Fossil fuel expansion projects halted by Indigenous-led campaigns represent the carbon equivalent of 12 percent of annual US and Canadian pollution, or 779 million metric tons of greenhouse gases, according to data gathered by the Indigenous Environmental Network and Oil Change International.

The report comes as the White House and Congress negotiate the final terms of a controversial permitting side deal with the Democratic West Virginia senator Joe Manchin, which could make it harder to legally challenge new pipelines and other fossil fuel infrastructure.