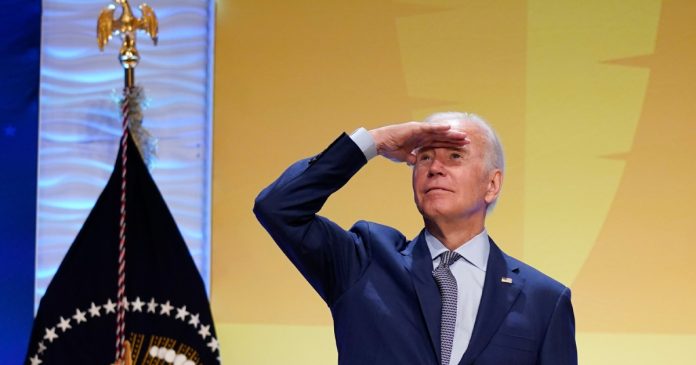 President Joe Biden looks into the audience as he leaves after speaking during the White House Conference on Hunger, Nutrition, and Health, at the Ronald Reagan Building.Evan Vucci/AP

At a White House Conference on Hunger, Nutrition and Health on Wednesday, President Joe Biden outlined a bold plan to eliminate hunger in the United States over the next decade.

“I know we can do this, end hunger in this country by 2030, and lower the toll that dietary-related diseases take on too many Americans,” Biden told the crowd of hundreds of nutrition advocates Wednesday.

There’s just one problem: the biggest components of that bold plan require congressional buy-in Biden doesn’t have and is unlikely to get anytime soon.

The conference was the first of its kind in more than 50 years, when the Nixon Administration convened more than 5,000 experts who collectively made and voted on 1,800 food and nutrition recommended policy changes, according to a 2020 report by the School of Nutrition Science and Policy at Tufts University. The 1969 conference was incredibly productive: 1,560 of the recommendations were implemented within a few years, including permanent authorization of the National School Breakfast Program and the creation of a government benefit to boost food security among low-income pregnant women, new mothers and their young children, known today as Special Supplemental Nutrition Program for Women, Infants, and Children, or WIC for short.

Nixon’s conference also laid the foundation for changes to the federal food stamp program, such as requiring that food stamp disbursements be able to cover the cost of a nutritionally adequate diet.

Biden administration officials hope Wednesday’s event will be similarly momentous. “In the years following the previous conference, Congress created transformational programs like WIC that have enjoyed bipartisan support for generations and have helped millions of Americans live healthier lives,” said one administration official during a briefing on the conference earlier this week. “We are committed to taking similarly bold action.”

In advance of the conference, the White House announced $8 billion in public- and private-sector commitments, including at least $2.5 billion towards start-ups working on combating food insecurity and $4 billion in philanthropic funds geared towards helping people access healthy foods and participate in physical activity. FoodCorps, a national nonprofit, has pledged $250 million to increase access to free school meals and to expand nutrition education in school settings. Publix grocery chain promised $3.85 million towards mobile food pantries that will offer free fruits and vegetables. Washington State’s Department of Health announced it will launch an online platform that allows WIC recipients to order food for pick-up or delivery.

The White House will also move to do some things through its executive authority and rule making processes, including proposing modifications to simplify the Federal Emergency Food Assistance Program (TEFAP) to improve access to food after national disasters, like hurricanes. For the first time, the administration will also hire a nutritionist to help the bureaus of Indian Affairs and Indian Education to provide “culturally-based healthy nutrition education.”

But the most impactful parts of the framework—things like restoring the free school lunches that millions of students took advantage of during the pandemic; eliminating some food stamp eligibility restrictions, such as those applied to formerly incarcerated people; creating a national program offering “prescriptions” to cover healthy foods for people experiencing diet-related health conditions; and increasing funding for nutrition programs serving seniors—need the sign-off from Congress, which isn’t likely to happen anytime soon.

Democratic aides tell Mother Jones that legislation addressing these goals is unlikely to pass before the midterm elections. And Republicans regain control of the House of Representatives, as polls predict, the odds of these initiatives getting through Congress during Biden’s tenure are dim. The White House has not provided a roadmap for how lawmakers should try to advance these ideas through Congress.

Even with the current Democratic majorities—albeit narrow ones—lawmakers tried but failed to pass a one-year extension of legislation that would have increased federal reimbursement rates to schools for meals they provided and made school lunches free for all students during the pandemic.

The Nixon administration had six months to prepare their event, according to NPR, whereas the Biden administration planned their event in just three months. (Congress passed a bill requiring that the event be held by the end of the Fiscal Year, which is Sept. 30).

“It was a very tight timeline to get the right people in the room [and] to shape these recommendations,” says Curt Ellis, the CEO of FoodCorps and a member of an independent task force that sent a slew of policy recommendations to the Biden-Harris administration ahead of the conference. Other task force members included chef José Andrés of World Central Kitchen and former Secretary of Agriculture Ann Veneman.

Ellis wasn’t alone in feeling the crunch. In late August, a person who had been on biweekly White House meetings to prepare for the conference put things less diplomatically, telling Politico the planning process was “a clusterfuck.” Just days out from the event, logistics remained in flux. An email sent by the White House conference organizers on Monday erroneously said the event was “next week,” and one government official’s aide told Mother Jones it was suggested to them by the administration that staff bring their own chairs due to limited seating. At the top of his remarks Wednesday, Biden accidentally asked if Jackie Walorski, the late GOP congresswoman who died in an August car crash, was in attendance.

“Jackie, are you here? Where’s Jackie,” Biden said in reference to Walorski, who was part of a bipartisan group that led legislation to fund the conference. “She was going to be here.”

But even if the event was imperfect, advocates say it was a necessary starting point to reduce hunger in one of the richest nations in the world, where hunger still affects more than 33 million people, including at least 5 million children, according to the Department of Agriculture.

“When I visit schools that FoodCorps serves, I hear directly from classroom teachers that the meal kids in their classes get at lunch is the only meal that child’s going to get that day,” Ellis says. “We’re the grown-ups, and we have a responsibility to make sure that every child who walks into school is well-nourished.”