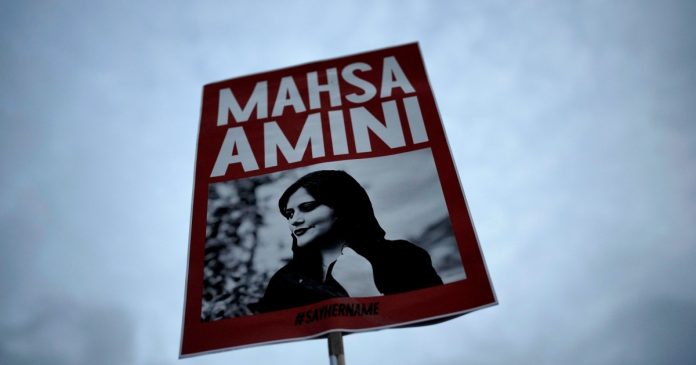 A photo of Mahsa Amini displayed at a protest in Berlin, GermanyMarkus Schreiber/AP

An Iranian journalist who reported on the death of Mahsa Amini has been thrown into solitary confinement, with no information about the charges against her, amid a major crackdown on the press in the country.

Niloufar Hamedi, a reporter at the Tehran-based Shargh newspaper, was among the first to write about Amini, 22, who fell into a coma and died on September 16 after Iran’s morality police apprehended her and brought her to a “re-education” center for not wearing her hijab properly. Authorities say Amini died after a heart attack, but her family says she had no prior health problems and accuse the police of beating her.

The 22-year-old’s death ignited massive protests across Iran, organized primarily by women, whose rights have been heavily restricted since the 1979 Islamic Revolution. Her name has also gained global recognition, with world leaders condemning her death and the subsequent violence toward protesters. “We call on the Iranian authorities to hold an independent, impartial, and prompt investigation,” experts appointed by the UN Human Rights Council said in a statement last week.

Hamedi took a photograph that went viral of Amini’s grief-stricken parents hugging in the hospital, according to the news site IranWire, which wrote about the reporter’s incarceration on Monday. At least 18 journalists have been arrested in Iran since the demonstrations began, according to the nonprofit Committee to Protect Journalists. Press freedom groups have called for their immediate release. “They were doing their jobs,” the Association of Iranian Journalists said in a statement. The country has also experienced a near internet shutdown and disruptions to phone and social media networks that have made it more difficult to share news. “[T]he Iranian authorities are sending a clear message that there must be no coverage of the protests,” the Middle East desk of Reporters Without Borders, another nonprofit, said in a statement. “We demand the immediate release of these journalists and the immediate lifting of all restrictions on Iranians’ right to be informed.”

The protests in Iran began with demands to end the mandatory hijab laws that likely led to Amini’s death, but the demonstrations have grown to more broadly oppose Iran’s leaders and clerical establishment. Thousands of people in dozens of cities have taken to the streets, with Kurdistan as the epicenter of dissent: Amini was Kurdish, part of a Sunni Muslim ethnic group that has long suffered under Iran’s Shiite government and has waged a separatist movement for decades.

Nationwide, at least 1,200 people have already been arrested in connection to the demonstrations, according to CNN, which cited a report from state-backed news agency Tasmin. Dozens of protesters have reportedly died at the hands of security forces.

Hamedi, the journalist who took the photograph, was arrested by Ministry of Information agents last Thursday, according to IranWire, and is now being held in Evin Prison. Other arrested journalists may also be stuck in isolation, a way for authorities to keep them separate from the political prisoners in the prisons’ general population units. In any case, they and other protesters likely face brutal conditions in incarceration: One Iranian woman told the BBC that she was detained in a small room with 60 women, with no space to sit or move. “They said we could not use the bathroom, and that if we got hungry we could eat our stools,” she said. “After almost a day, when we shouted and protested inside the room, they started threatening us that if we didn’t keep quiet, they would rape us.”

Hamedi’s husband, Mohammad Hossein Ajorlou, was reportedly able to talk with his wife on Monday, and says she is trying to stay calm in solitary as she waits for more information about her case.